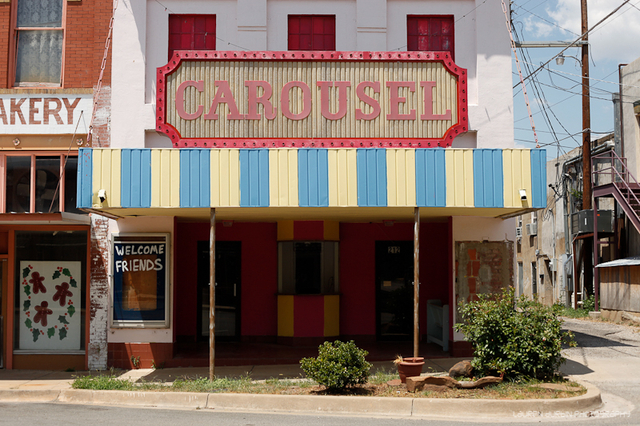 A view from 2009 of the former Ritz Theater in Sulphur. There is probably a neat little theater behind this nightmarish facade.

I found an advertisement for another Sulphur theatre called the “Pinto” that also shows an advert for the “Carousel,” which was a children’s clothing store. Flyer was dated 1974.

Here’s 4 Photos of the Ritz / Carousel Theatre from November of 2007..

This theater was owned in the late 1980s by my father, Dennis Arterburn. I basically grew up in this theater. He refurbished it himself after many years of not being in operation. The first showing was the movie Legal Eagles. He named the theater Carousel, as there was a theater in Madill called the Ritz, which he also owned. He later refurbished and opened a theater in Healton, and previously partially owned the Tivoli in Ardmore. I remember him putting the Carousel sign up but I can’t remember where he found it. To look inside the windows of the theater now is like seeing it frozen in time. The light fixtures are the same, the cabinets, even the concession sign is the same. I would love to get the chance to go back inside one more time.

Family vacationed in the Sulpher area in 50’s, 60’s and would frequent a movie theatre in town but, not sure if this is the same one..Seems that it may have been destroyed by fire..But, always enjoyed Sulpher area and old Platt National Park. Thanks for sharing.

The long-running Carlton Theatre closed in 1959 and was refreshed becoming the Ritz Theatre in March of 1959.

Also known as the Carlton Theatre

Any pictures of the inside of this theater?