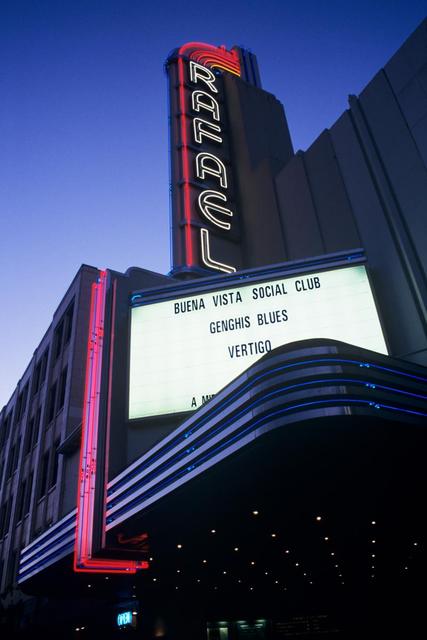 The California Film Institute has restored the former 1,100-seat Rafael Theatre, now officially called the Christopher B. Smith Rafael Film Center. The Art Moderne style New Rafael Theatre was a June 1938 renovation by architect A.J. Hopper of the fire-damaged 1918 former Orpheus Theatre designed in 1920 by the Reid Brothers. It had 1,50 seats. It now houses three screens, specializing in independent and foreign films.

Could the Orpheus Theatre have been the house at San Rafael for which plans were then being completed, according to the January 30, 1918, issue of Building and Engineering News? The item listed the owner of the house as Thomas Phillips, General Manager of the American-Irish Players Company of New York City. The architect for the project was New Yorker Francis H. Kimball.

The Rafael was featured in Lucas' “American Graffiti”. When the cop pulls over Milner in the yellow deuce coupe he stops right in front of the theater. Images here

Glad to see this is still open and in use as a movie theatre, even if parts of it are no longer original.

Was there ever an “Orpheum” theatre in San Rafael, or is this the only theatre there with a similar name?

Because: In “The Encyclopdia of the American Theatre Organ”, pg. 629, there is a listing for a Smith theatre organ having been installed at an “Orpheum Th.” in San Rafael at some point. No other details are given in the book, such as size of organ, date of installation, blower info, etc.

So, could this (Orpheum/Orpheus) simply be a typo or a bit of mis-information that crept into the book? I know that this particular volume of the Encyclopedia (Volume II) has an appendix in the back filled with corrections, some major, most minor, to the previous volume (Volume I), including much subsequently-discovered (and subsequently-corrected) info about theatre names, people’s names, organ technical data, etc. Unfortunately, Mr. Junchen died before Volume III was completed (the tome on Wurlitzer) and as far as I know, the “new” posthumously completed Volume III (Wurlitzer), while excellent for its subject, doesn’t have an appendix with additions/corrections to Volume II.

If fire really “gutted” this building in 1937, could the organ have gone up in flames with it? Does anybody know? Thanks for the info!

An ad for the Orpheus Theatre in the February 5, 1920, issue of The Marin Journal specifies that the house had a Seeburg-Smith organ.

I now know that the Orpheus Theatre was not the house built for the American-Irish Players Company in 1918. In fact, that project might never have been carried out. Articles in various Marin County newspapers from the 1920s through the 1960s indicate that the Orpheus was built by the Tunstead estate in 1919 and leased to Max Blumenfeld and Sam Gordon before it was completed. An item in the May 3, 1919, issue of The Moving Picture World had these lines:

“These same architects [Reid Brothers] are working on plans for a 1,500-seat house to be erected at San Rafael, a suburb of San Francisco. This theatre, which will cost about $125,000, has been leased to Max Blumenfeld and Sam Gordon for a period of twenty years.”

The opening of the Orpehus Theatre on January 21, 1920, was recorded in this article from the following day’s edition of the Marin Journal

Several sources say that the 1938 rebuilding of the Orpheus as the Rafael Theatre was designed by S. Charles Lee. That could be the case, but the Rafael dates from the period when a number of northern California theaters were designed by the unlicensed William B. David and his plans were signed by other architects, including Lee in some cases, so there is some possibility that the Rafael was one of David’s designs. He designed several projects for Blumenfeld over the years.

If I ever find out more about the whereabouts of this organ (assuming it wasn’t destroyed/junked during the 1937 fire and 1938 remodel), I’ll let you know!

Several 1970’s photos and a vintage postcard of the Rafael as the Orpheus added.