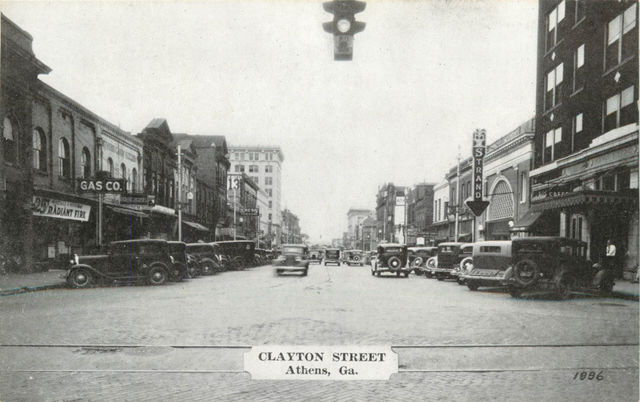 The Strand Theater dates back to at least 1919.

The Strand Theater opened Feb.21, 1918 with the film “The Foundling” starring Mary Pickford. and was a local creation.
the architect was a Col. J.W. Barnett. The Kilgen organ was installed in 1919, and was not really a theatre organ. The only unit stop was the vox humana. Ranks where 8' open diapason, stopped flute, harmonic flute, oboe gamba, dulciana, vox humana,16' Bourdon/melodia. The organ was later removed from the theatre and went to 1st Baptist Church Elberton, Georgia. where is was used until just a few years ago when a new organ was built for the chapel. The theater was a type of “old store becomes theatre”, long and narrow.

The Strand was open as early as 1916 and closed in 1954. The building appears to still stand, heavily altered.

It’s now Cutter’s Pub, a frat boy bar. Never realized it was a former theater, but I can kind of see it.