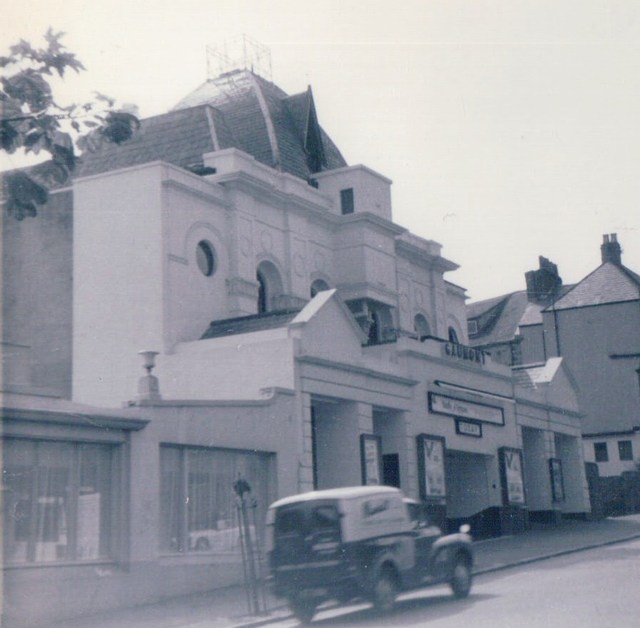 Located in St. Peter Port on the Channel Island of Guernsey. Originally opened in 1876 as a live theatre, known as St. Julian’s Theatre, it was designed by architect William Robillard. It began screening films around 1913 and was taken over by the British owned Albany Ward Circuit in 1915 and they began cine-variety shows. Taken over by Provincial Cinematograph Theatres(PCT), they were taken over by Gaumont British Theatres in 1929.

It was closed in 1930 for a complete internal reconstruction to the plans of architects William Edward Trent and Ernest F. Tulley, re-opening on 30th June 1930 as the Gaumont Palace. There were 570 seats in the stalls and 188 seats in the balcony. It was re-named Gaumont in 1937.

The cinema came under enemy occupation during the war when the Germans overtook the Channel Islands. Civilians were allowed to attend, but had to sit on one side of the stalls, whilst Germans sat on the other side and had exclusive use of the balcony. There were some prints of English and American films left behind on the island which were occassionally screened, but the cinema mostly screened new German-made films. After the end of the war, it re-opened in October 1945, again operated by Gaumont British Theatres.

The Gaumont was closed by the Rank Organisation on 5th January 1985 and has now been converted into a bank. By 2016 it had been demolished and a bank now stands on the site.

A vintage photograph of the Gaumont St. Peter Port in 1949:
View link

According to Island Wiki the Gaumont has been demolished for a bank, full history at http://www.theislandwiki.org/index.php/St_Julian’s_Theatre there is also an image of a vacant plot at http://www.islandlife.org/scenes_of_guernsey_dgb.htm