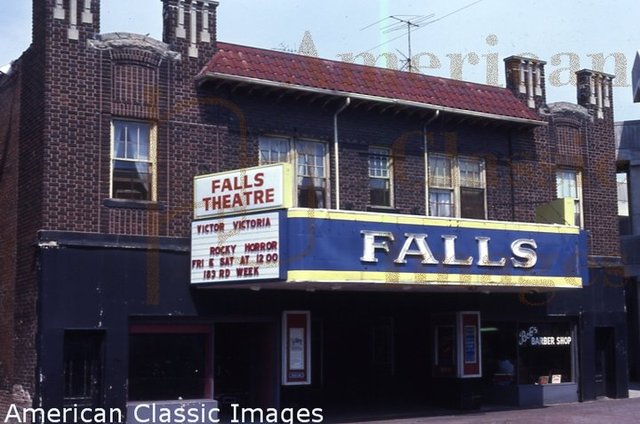 The Falls Theater was built circa 1925. In 1962, this theater was converted to a Cinerama theater. Seating was reduced from 1,000 to approximately 630 seats at that time. As of 2004 the building was still standing. In the summer of 2016 plans were announced to convert the theatres into a micro-brewery.

“The Falls Theater”: Good luck on your negotiations. I wish you well on your project.

Thank you… If all goes well i should be ready to open later this year or early next year!

I attended the Falls Theater from ‘83-'91 for screenings of Rocky Horror. Ah, the good old days. I wish you the best of luck, hifiman!

The NRHP nomination form for the Moreland Theatre in Cleveland lists the Falls Theatre in Cuyahoga Falls as one of five theaters designed by the Moreland’s architects, Sigmund Braverman and Kurt Havermaet.

hifiman – have you had any luck with the renovations? Really curious as to the state of the theatre these days!

On June 26, the Ohio Development Services Agency awarded $27.8 million in Ohio Historic Preservation Tax Credits to 26 applicants to rehabilitate 39 historic buildings, including the Falls Theater. The Falls Theater, at 2218-2220 Front St., was approved for a $249,999 tax credit. The total estimated cost of the project is $1.27 million.

Would anyone have any information on the projection equipment that was used at Falls Theater? I was able to purchase the Simplex Standard projector from there and it appears to have been a silent hand crank setup. Any info would be most appreciative. Thank you!

The space occupied by the Falls Theater has been nicely remodeled into “The Workz on the Riverfront. The Workz houses an Arcade, Duckpin Bowling, Virtual Reality, a Speakeasy with full menu. They host parties and social events. The walls, ceiling and proscenium arch have been beautifully restored with an original (60’s) projector on display at the entrance. 30 years after going dark, with so many false starts, it’s nice to see this space in use again, still retaining some of its original architecture.