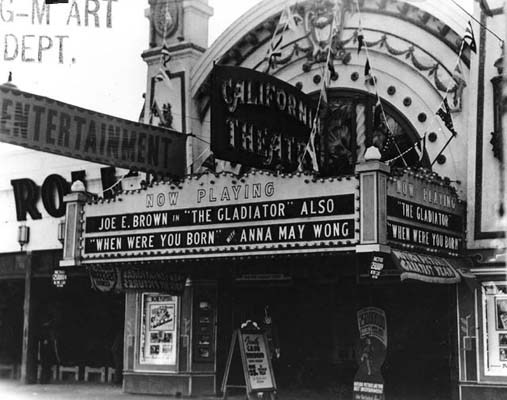 Built on the site of the scenic railway and opened as the California Theatre on July 1, 1920 with Wanda Hawley in “Miss Hobs”. In later years it was renamed Venice Theatre. The theatre closed in the mid-1940’s.

There is a reference to a Venice Theatre in the year 1908 on this time-line of Venice' history.

I watched Quicksand last night. There are a few scenes where the theater is visible. If you’re interested in Venice or Santa Monica, circa 1950, this is the film for you as the entire production appears to have been filmed in that area.

A comment I made here a few days ago has either gone missing or didn’t post to begin with. Luckily, I saved a copy of it elsewhere:

The Regional History section of the California Index at the L.A. Public Library web site contains a card referencing an article in the July 1, 1920 issue of The Venice Vanguard which names a Mr. Melvin P. Ogden as the “Opening manager of the new California Theater at Venice.”

Additionally, the same index contains cards indicating that the California was designed by David D. Smith. A card referencing Southwest Builder & Contractor issue of 1/23/1920 says that “D.D. Smith, Venice, has a contract… for the erection of a brick theater building… corner of Ocean Front Walk at Zepher Avenue (sic)….” Zephyr Court appears on the oldest map I have of the area as running eastward from Ocean Front, just north of Windward. Owners of the theater are named as C.G. Parkhurst and George J. Cleveland.

Southwest Builder & Contractor issue of 2/27/1920 says “D.D. Smith has prepared plans and will superintend the construction of a theater and store building on the site of the scenic railway on Ocean Front Walk…the building will be 106 by 175 feet… and will seat 1500… cost about $50,000….” The exaggerated seating capacity was characteristic of construction announcements in the era, but the timing is good and the location accurate for the un-named theatre in question to be the California.

The Venice Theatre mentioned in the time-line to which I linked in my previous comment must have been a different building, though it was undoubtedly nearby.

The Venice Timeline to which I linked in my comment of June 30, 2006 has been moved. The section I mentioned is now here.

Here is the Venice Timeline Index, with links to five sections each detailing two decades of the area’s history.

If you are using the Google map search above it will send in the wrong place. The current address to use the map search is 1508 Ocean Front Walk, Venice, CA 90291.

Here is a closer view of the 1949 LAPL photo I posted a while ago:
http://tinyurl.com/2lboln

The first movie theater I remember is the old Venice/California theater. I recall seeing the movie “The Third Man” starring Joseph Cotton and Orson Wells around 1949. I also remember going to Saturday Matinees which included cartoons, Movietone News, a Flash Gordon Serial, plus a double feature. This had to be shortly before it was demolished. After that, it was the Dome and Rosemary theaters in Ocean Park.

My father kept a diary when he was a teenager in 1920s Los Angeles. Here’s part of his entry for November 1, 1924: “With Hancocks to Venice to California Theater and saw Edmund Lowe in “Honor Among Men” and 5 acts of vaudeville.” Five acts of vaudeville!

This opened on July 1st, 1920 with “Miss Hobbs”. Grand opening ad in the photo section.