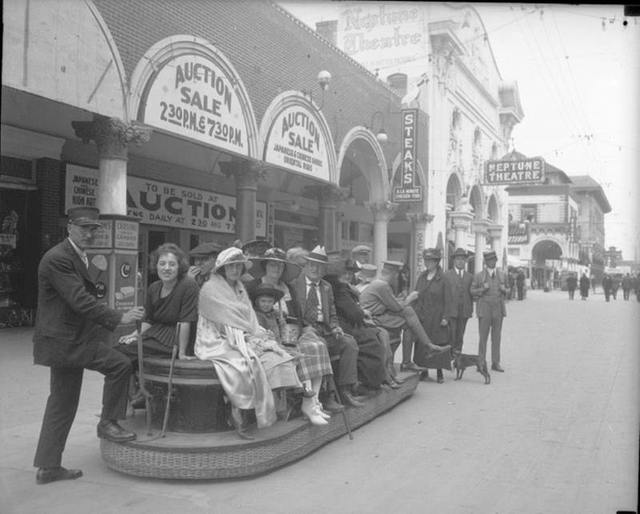 The Neptune Theatre was located on Ocean Front Walk at Market Street. It opened on May 22, 1911 and was operated by Arthur S. Hyman circuit. Presenting his vaudeville circuit show, it also screen early silent films. It was closed in November 1911, when Arthur Hyman left for New York after declaring bankrupcy. A new operator took over and reopened the Neptune Theatre as a nickleodeon movie theatre in 1912 and it continued as a movie theatre until closing in 1928.

The Venice Timeline claims that the Neptune Theatre opened in 1911, with 750 seats.

The L.A. library’s California Index confirms a 1911 opening for the Neptune Theatre. The opening date was either May 22 or May 23, 1911, according to an ambiguous article in The Santa Monica Outlook of May 12, 1911. The theatre was owned by David Evans, and was upon opening operated under a lease by Los Angeles vaudeville impresario Arthur S. Hyman (whose Hyman Theatre at 8th and Broadway in Los Angeles later became the Garrick Theatre and was finally demolished to make way for the Tower Theatre.) According to the February 3, 1912 issue of of the regional entertainment publication, The Rounder, the Neptune in that year presented previews of a number of movies made by the Bison Company, a local Santa Monica studio.

The Neptune marquee is visible on the left in this 1915 photo:
http://tinyurl.com/oh5u75

This postcard shows the Neptune Theatre in the background beyond the Merryland Arcade. It is postmarked July 7, 1913, so the photo was probably taken within two years or less of the theater’s opening.