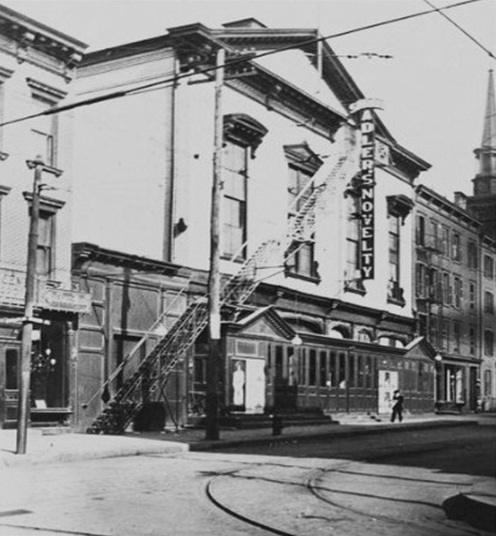 The Novelty Theater was located in the Williamsburg section of Brooklyn. It is listed as operating in the 1914-1915 edition of American Motion Picture Directory. The address given is S. 4th Street and Driggs Avenue. It has gone from listings by 1926.

Any additional information would be appreciated.

What a great name for a theatre!!!

I bet most people living in this apartment building have no idea why their building is called “Novelty Court”, clearly seen in this view

The Brooklyn Theatre Index has much to say about this theater. In fact, the Novelty occupies about 13 pages of space – from page 151 through 163 in volume 1.First, the Novelty’s address is given as 780 Driggs Avenue and its capacity during its latter days was approximated at about 1,000. So, the site manager should add these stats to the site description.   Originately established as the Odeon Hall in 1852, this theater went through over 20 name and management changes – including six designating it as the “Novelty” – before finally giving up the ghost in 1916. For the most part, this was a legitimate stage and musical hall operation that, during the cusp of the new century, became a “Hebrew Theatre”. At the end of its run, it was described – in a 1916 Brooklyn Eagle article – as being “an ordinary movie house” that “had fallen under hard times”. (This establishes this theater’s scant cinematic history.) During 1916, the Novelty was sold to a developer who constructed a 50 unit apartment house – the current “Novelty Court” – on this site.The Brooklyn Eagle article noting this sale goes on to state that the developer “expects to use the bricks of which the theater is built for the interior walls and the rear walls of the new apartment house”. So, more of the old Novelty – in addition to the name – may still exist to this date.

Thanks, site manager, for such a prompt response in posting the Novelty’s address and capacity.

While it is possible that some of the theater’s old bricks were used in constructing the Novelty Court apartment house – if in fact this ever did occur – it is clear that the latter is a totally different building. Thus, it probably makes the most sense to designate the old theater in the “Demolished” category.

Hope this isn’t too far off topic, but the Novelty Court, the appartement building which replaced the Novelty Theater, was the site of the 1970’s shooting of the policeman known as “Serpico”, which revealed publicly the extent of corruption in the police force. This address has seen a lot of history.

Thanks, Siane. I think that tid-bit is perfectly ON topic and a welcome piece of information. Not to mention that it ties in to cinema in that the events were depicted in the famous film.

Fascinating comments Siane. Who would have known? Actually the exterior – and possibly the interior – shots that depicted these scenes in “Serpico” were taken at another building situated a few blocks to the south – I believe on South 9th St. That building may have been demolished during the interveening years.

The steeple – and in all probability the church itself – have been demolished. Like the Novelty, they were probably replaced by apartment houses. In the wake of the opening of the Wlliamsburg Bridge in 1903, Willliamsburg’s population skyrocketed. This produced a critical need for additional housing units. To meet this need, many large apartment houses were constructed in this vicinity during the first three decades of the past century.

I will, however, further check out this item the next time I visit the area.

The church in the background is the South Third Street Presbyterian Church. The church was first organized in 1844. The building in this picture was constructed in 1845-46. The church was demolished in the 1960s or 1970s and replaced with a new structure. The congregation is still active in this new church.