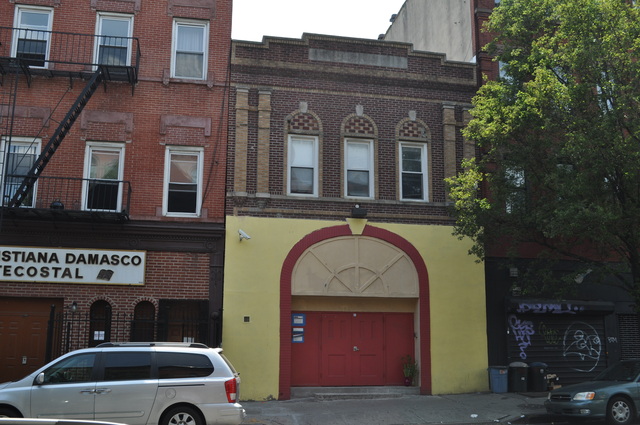 Located in the Williamsburg section of Brooklyn. The Metro Theatre was built on the site of the old Unique Theatre, a vaudeville/legit house that had opened on August 18, 1894. It was known locally as “Da Bum”. A young Al Jolson’s first Brooklyn appearance took place at the Unique Theatre on December 10-15, 1900. Taken over by William Fox as a movie house, the Unique Theatre became the Comedy Theatre (aka The Comedy, aka Fox’s Comedy Theatre). It was demolished in 1923, and has its own page on Cinema Treasures.

One question. Is it possible that this theater could have been named the Grand Opera House during a portion of its pre-Metro days, particularly around 1907? On the Grand Theater (Brooklyn) page, someone referred to a 1907 program for a Grand Opera House that possessed exits leading to both Grand and South 1st Sts. While this does not fit the geography of the Grand, it certainly approximates that of the Metro, whose lot backs right into South 1st. In addition, the vaudeville theater’s prior capacity of 1,500 would certainly fit the dimensions of an “Opera House”.

Just checked the Building Dept. files for this address. There is not much to go on. The only certificate of occupancy dates from 1991 and references a two story storage and office building. None of the other listed actions are helpful.

However, the c of o does include a City lot that runs from 194-6 Grand to 167-73 South 1st St. This is the foot print of what could easily be a theater – and one that definately extended through the entire block. So perhaps this could have been the site of a once named Grand Opera House – or not.

When I have the chance, I will visit the site and report what I find.

I was able to visit this site today and can report the following.

The old Metro still exists and is now included within a church named the Iglasia Chrismatica Espiritu De Hermandad. While no reference to the church appears on the old – and narrow – Grand St. entrance, it is clearly depicted on the South 1st St. side of the building, which serves as the church’s current entrance. Given the fact that the building lot only references one street number on Grand St. but several on South 1st St., this makes sense, since most of the old theater proper abutted South 1st. (It is possible that the Grand St. portion of the building, which was the old lobby, hosts another use, though it is probably an auxiliary exit for the church. It is, in any event, painted in the same color scheme as is the church)

As noted above, the 194 Grand St. entrance is quite narrow and is flanked by two older buildings. (The latter were probably constructed when the previous theater was built.) It is a two story brick building with either an office or an apartment situated on the upper level. Unless you were informed of its previous use, you would never know that this was once a movie house.

So, I hope that I have filled in a gap here. Now, can anyone tell anything about the old Grand Opera House?

The use for this theater should be changed to “Church” instead of “unknown”, as it is being used by a church. The building is in nuce shape, I would assume as a church, it may still look like a theater inside.

Click here is a google street view image of the old Metro theater:

Also, John had asked for an aerial view of the property, so below is a link to that too. Note that south is on the top for this view:

Thanks so much Bway for providing this valuable information.

The aerial shot is fascinating, since the Metro must of had one of the longest and narrowest lobbies that I have ever seen. It is entirely possible that whatever currently exists in the old lobby is not associated with the church at all, though it could also be used for auxiliary church space and provide a way to the fire exit.

Another thought that just struck me is that while Williamsburg may no longer host any movie theaters, it sure serves as the home of a ton of churches!

this is a link to the certificate of occupancy for the current “iglesia carismatica espiritu de hermanda,” which is the old Metro Theatre

it lists a current legal capacity of 536

johndereszewski in 1881, the building at Roebling and Lee Av. was sold and reconfigured to become the Grand Opera House, and then the Lee Avenue Academy of Music, a concert and performance hall, which operated until 1895. In 1900, the theater was renovated and refigured again, this time as Corse Payton’s Lee Avenue Theater. You may find it listed here as the Payton Theater. you may read the article at this link; http://www.brownstoner.com/architecture/building-of-the-day-27-lee-avenue/#more-87529 I hope this was helpful….

You may enjoy this story I just wrote about a performance with cats at the Old Grand Street Museum, which was later the Theatre Unique, Comedy Theatre, and Metro Theatre. It has lots of history about the theatre. http://hatchingcatnyc.com/2017/07/02/cats-grand-st-museum-williamsburg/