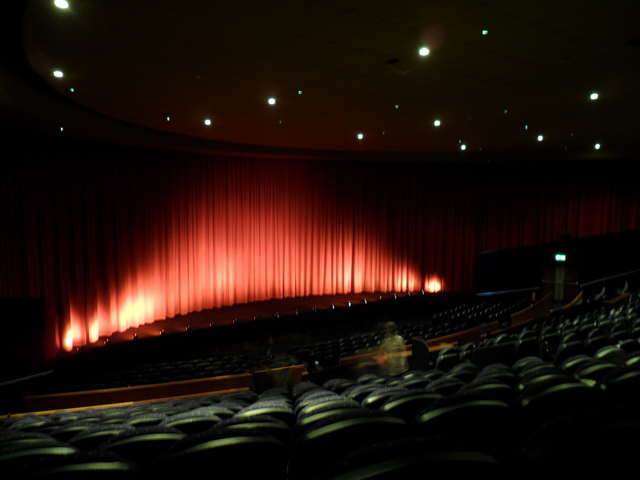 The Westover Super Cinema was built for and operated by Associated British Cinemas(ABC), and was designed by their ‘in-house’ architect William Riddle Glen. It opened on 19th June 1937 with Fred Astaire and Ginger Rogers in "Shall We Dance".

It was located adjacent to the Westover Palace Cinema, which closed the night before the new Westover Super opened. Designed in a striking Art Deco style, seating was arranged for 1,605 in the stalls and 910 in the circle levels. The cinema was equipped with a Compton 3Manual/6Rank theatre organ which was opened by noted organist Reginald Porter-Brown. There was also a restaurant and a balcony cafe for the convenience of patrons.

On 24th September 1969, the ABC was closed for twinning, re-opening on 13th June 1970 with 644 seats in the former circle (ABC 1 which is equipped for 70mm presentations) and 982 seats in the former stalls (ABC2). The re-opening films were "Paint Your Wagon" and "All the Way Up". The cinema had been given a ‘modern’ look in both auditoriums, with curtained walls and ‘modern’ new facade over the entrance hid the original Art Deco style frontage.

This was not to last long and the name ABC returned to the building when a management buy-out was completed in 1996. In 2000 the ABC came under the control of Odeon Theatres Ltd. Odeon also operate the former Gaumont in the town. They closed the ABC on 4th January 2017 with a special screening of “Back to the Future”.

I believe today marks the final day before the ABC Bournemouth is handed over to the developers, who have ear marked the property for demolition to facilitate the construction of flats. A proposal has been suggested to keep the facade of the Westover if enough of the Art Deco design remains behind the cladding applied by EMI in the early 1970’s. This is unlikely however as original Art Deco frontage was simplified during a previous modernisation of the cinema and the original impact of the 1937 design was greatly reduced. The cinema has, so I am informed, had many of the original fittings salvaged, including the seats, screen frames, screen tabs (ABC1), DP75 projector, ABC carpet and the giant illuminated ABC triangle sign originally fitted to the front of the building. Personally I will be very sad to see my favourite cinema reduced to rubble as I believe it would offer more to the town in the guise of a cinema than just more flats. An arts cinema in the same vein as that offered to the citizens of Brighton would be a far more imaginative use for the Westover, as the choice of films locally is still very poor despite the new multiplex that opened in February this year.

Very sad that a cinema of this calibre has been sacrificed for yet another soulless multiplex…….

The developers have submitted plans for the demolition of the ABC cinema Bournemouth. If anyone would care to submit their thoughts to the planners on this matter the application number is 7-2017-1685L and the dead line for your submissions is 25-08-2017. Sorry I am unable to send a link to Bournemouth Borough Council’s planning website, but if someone can then that would be helpful. Thank you.

Today is the last day (25/August) to submit your thoughts to the planning section of Bournemouth Borough Council about the proposed demolition of the ABC cinema in Bournemouth.

Planning application no. 7-2017-1685-L was refused by Bournemouth Council.

Video of the final screening.

Does anybody know what music is used in the “montage” sequence at the start, and in edited form, in the ABC policy trailer after? Fantastic stuff, excellent composition and arrangement, perfect to set the mood…

That would be Score by Richard Myhill. https://www.youtube.com/watch?v=bnqhK9ZwY2E

Awesome, thank you very much!

Can’t find any CD copies, but it’s available in HQ via digital download/streaming including Spotify.