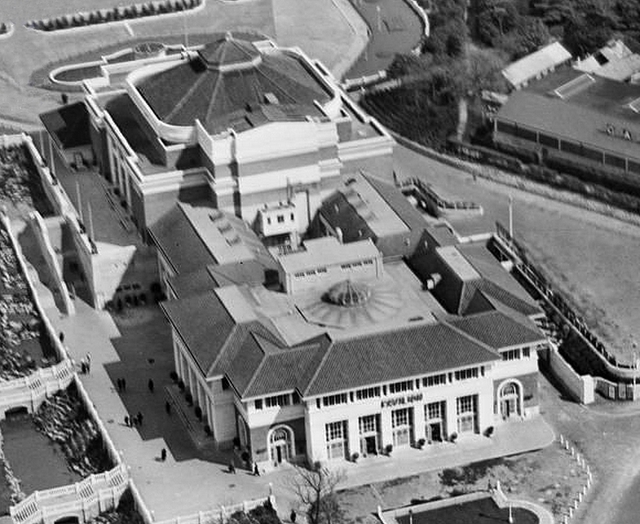 The Pavilion Theatre was built in 1929, together with the 1,000 capacity Pavilion Ballroom. Today it is is part of the Bournemouth International Centre entertainment complex which includes a 3,561 seat Concert Hall (built in 1984). All are owned and operated by Bournemouth Borough Council.

The Pavilion Theatre and Ballroom were designed by architectureal firm Home, Knight and Williams, and replaced the older Winter Gardens. The Pavilion Theatre was used for films, variety shows and orchestral concerts. The proscenium is 45 feet wide and the stage 31 feet deep. There were originally eight (now increased to seventeen) dressing rooms. On 19th March 1929 a Compton 4Manual /22Ranks theatre organ was installed, which has the console on the lift.

The Pavilion Theatre was used regularly to screen films, and this use lasted into the 1950’s. Today it is a national touring house for live theatre productions.

The Pavilion Theatre is a Grade II listed building.

Hi. Super site. For your information, the Bournemouth Pavilion is now operated by a charitable Trust called BHLive.

The Pavilion is 90 years old today.

As ritzman says, the Pavilion was 90 years old on Tuesday 19th March 2019. A special anniversary film and stage show was presented. The programme was introduced by Technical Co-Ordinator Christian Knighton, who presented a slide show history of the Pavilion. He was followed by a recreation of the Pavilion Municipal Orchestra, conducted by David Sims, then archive footage of Bournemouth was accompanied by Donald Mackenzie on the Compton organ. He then gave a recital followed, after the interval, by a screening of the 1933 Hollywood musical “42nd Street”, starring Dick Powell and Ruby Keeler. In an really nice touch, patrons received a complimentary souvenir brochure. To add to the occasion, David Eve and Gary Trinder, of the Cinema Theatre Association, set up a comprehensive display of cinema memorabilia in one of the side corridors.