Friends of the Alger Theater (Official) 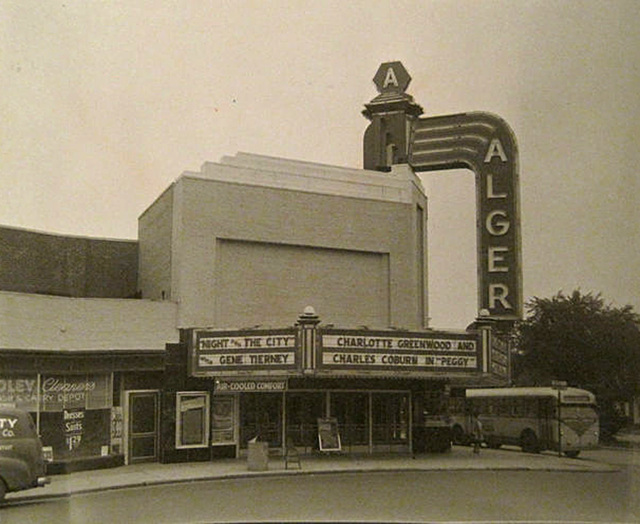 Opened August 21, 1935, the Art Deco style Alger Theater could seat 1,182 in its auditorium. It was originally built for the United Detroit Theatres circuit, but was not long afterwards acquired by the Wisper & Westman chain, and later by Suburban Detroit Theatres.

The Alger Theater had its interior modernized in the early-1970’s. Its exterior, complete with the tower with the theater’s name on it, was left relatively untouched.

In 1977, the Alger Theater stopped showing movies and switched to live shows, for which a new stage was built.

However, by 1983, it was showing movies once again, mostly horror and action films. During a screening of "Friday the 13th Part 5" in 1985, a riot broke out in the auditorium and a fire was set, which caused heavy damage to much of the interior, forcing the Alger Theater to close down.

In 1987, the theater was purchased by a group called The Friends of the Alger, whose goal was to return the theater to its original appearance. In 2015 renovations continue, but it reopened June 14, 2015 with “Young Frankenstein”, the first of several planned screenings.

The Friends pf the Alger is holding a fund-raiser: View link

Reopening Sunday June 14, 2015. Status should be changed to “Open”. Story in link below. Copy and paste to view.

I drove by the Alger Theater on Saturday, March 12, 2016. Looks to be in good shape, but didn’t look like much of anything was happening other than a message on the marquee for a local business, and a phone number to call to put a message up. Not the greatest neighborhood, but better than others on the east side of Detroit.

Hi, all. Thanks for your interest in Detroit’s Alger Theater. I’m pleased to report, there is more going on in and around our community theater than meets the eye: interior renovations continue; community outreach deepens; and fund development is in process. Your conversation and involvement are welcome and appreciated. Check out our website and follow us on Facebook and Twitter to learn more: