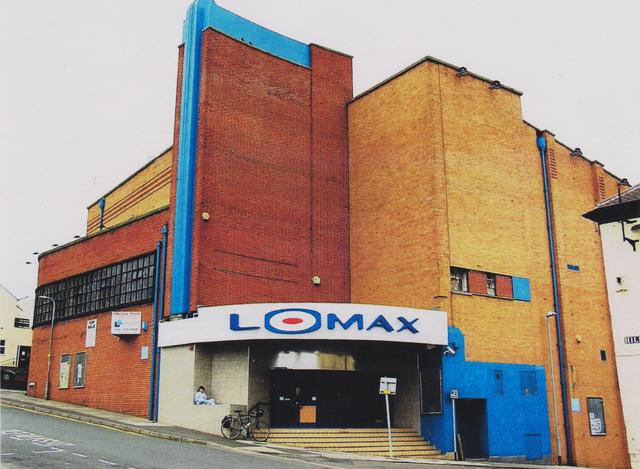 Located in the ‘Potteries’ town of Stoke-on-Trent, Staffordshire, at the corner of Hill Street and Consort Street. The Danilo Cinema opened on 27th November 1939 with Edward G. Robinson in “Confessions of a Nazi Spy”. Designed by local Tunstal architect A. Glyndon Sherwin, it had a spectacular Art Deco style interior with a "cut-away" proscenium opening and a Holophane lighting system. It had 1,800 seats in stalls and circle.

It was taken over by the Newcastle based Essoldo Cinemas chain in August 1954 and was re-named Essoldo. The Essoldo Cinema closed on 16th April 1966 with Sean Connery in “Thunderball”. It then spent many years as a bingo hall, first as Essoldo Big Bingo, then Ladbrokes, Top Rank Bingo and finally Mecca Bingo Club which closed on 22nd April 1998. It then underwent a Â£600,000 transformation into a live music venue called The Lomax. This failed and the operation went into liquidation - the interior of the building is believed to have been wrecked with all metal stripped out.

The former Danilo Cinema was sold, and it was demolished in July/August 2008. A sad end to a fine cinema building. A block of flats has been built on the site.

Have since found out that it would have been left standing…but for the fact that “NEW LABOUR” abolished the empty buildings business tax exemption last year….pity we didnt do more …like trying to get it listed…..listed buildings are still exempt as long as they are empty….now we are going to be left with a gapeing big hole as there are no plans to build in the near future…thanks a million “new labour” how many more treasures are we gonna lose cos of their stupidity….cheaper to demolish than leave,,,mind you “new labour "have destroyed almost everything else they have touched..thank God they wont be around much longer

Living at Weston Coyney at the time, the town of Stoke was way out of my area, as I usually went to the Broadway in Meir; the Alhambra in Normacot and the ABC Empire and the Focus in Longton. But I paid my first visit to the Essoldo, Stoke, at the age of 13 in 1960, to see revivals of Heaven Knows Mr Allison and The Deerslayer and a week or so later, the new release of The Story of Ruth. I went back there in August, 1962, to see King of Kings; Guns in the Afternoon; Village of Daughters; The Phantom of The Opera and Captain Clegg.