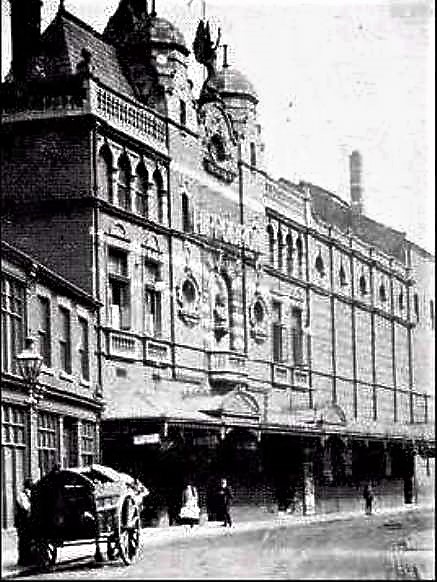 Located in the potteries town of Stoke-on-Trent, Staffordshire. The Crown Theatre was opened as a live theatre in 1897 and was designed by architect Lynham Beckett. It was a wooden building.

In 1900, it was re-built to the plans of architect George F. Ward of the Birmingham based architectural firm Owen & Ward, and named Gordon Theatre (named after the Gordon Hotel which stood opposite). The theatre had a 154 feet long facade, and over the entrance was a stone bust.

Known as the Hippodrome Theatre from 1908, it had become a variety theatre, with films screened as part of the variety bill. At that time it was owned by T. Allan Edwardes, who operated a small chain of live theatres in Derby, Nottingham and Newcastle-upon-Tyne. It was taken over by the MacNaghten Vaudeville Circuit in 1911. Renovations were carried out in June 1913 and it re-opened on 14th August 1914 with Mmlle Lois du Canes Company performing.

It was taken over by the Biocolour Picture Theatres circuit and converted into a cinema from Easter Monday, 21st April 1919 with William Faversham in “The Silver King” and “Winkle in Wallaparoo!”. It was re-named Picturedrome, and an Aeolian 2Manual organ was installed. In the early-1920’s, it was re-named Hippodrome again.

In November 1926 Biocolour were taken over by the Denman/Gaumont British Theatres chain.

It was closed on 27th December 1951 with “Mr. Belvedere Rings the Bell” and “Nightbeat”. The cinema underwent a major internal modernisation in a Streamline Moderne style, which removed all traces of the Victorian theatre decoration. The exterior remained unaltered, apart from a new vertical name sign. It re-opened as the Gaumont on 28th July 1952 with Charlton Heston in “The Greatest Show on Earth”.

The Gaumont was closed by the Rank Organisation on 14th January 1961 with Yul Brynner in “Solomon and Sheba”. The building was sold and was demolished in May 1962. A parade of shops was built on the site.