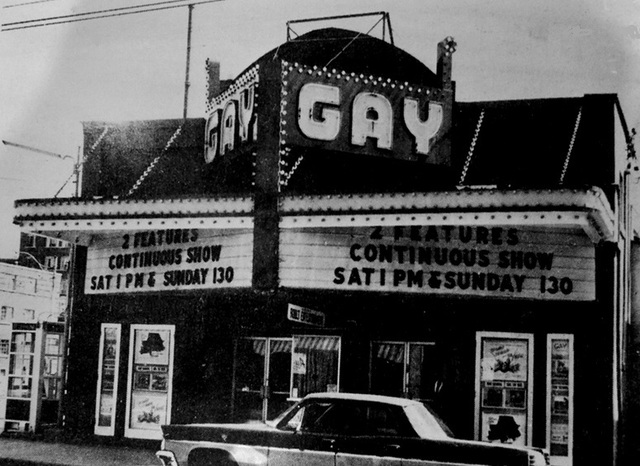 This neighborhood theatre opened as the Bluebell Theatre prior to 1925. It was renamed the Gay Theatre in 1954 and closed for a while in the early-1970’s. It re-opened in 1973 as the Parliament Cinema, screening East Indian movies and finally closed around 1983

That closure date is incorrect. I recently ran across an ad for a double bill of THE PROUD RIDER and OUTLAW RIDERS from 1972, so the closure was sometime after that.

The Bluebell was in operation at least as early as 1925, and probably earlier. “The Storms Below,” a biography of Canadian writer Hugh Garner, quotes a letter from a former childhood neighbor of Garner, who lived in the area in the 1920s, which mentions the matinees at the Bluebell Theatre. Google Books preview.

Here is a picture of this theatre in its final incarnation as the Parliament Cinema. As such, it should not be confused with an earlier and much larger Parliament Theatre which was once a few blocks away.

This webpage includes a reminiscence of Cabbagetown resident who attended the theatre as a youth when it was the Gay Theatre.

Actually… THIS Parliament Cinema never closed in 1979. The fact of the matter was that it became a hugely popular Indian & Pakistani movie house from 1973 that was owned by South Asian Media architect & patriarch, SGP Jafry (on the cusp of celebrating our industry’s 50th year) where major films of the time were with names like Amitabh Bachchan (yep, Aishwariya Rai’s F-In Law). This theatre did in fact continue to go until something like… 1983 or 1984 when our Indian & Pakistani films, then on videotapes essentially killed the businesses of all our movie houses.