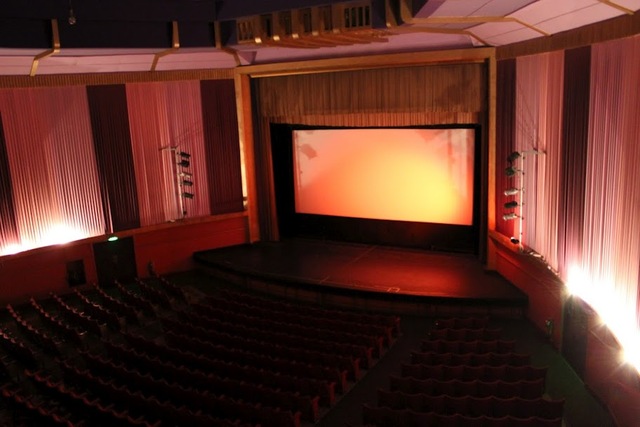 This cinema is situated at the bottom of the main street in Redruth, Cornwall. When I was a child it was a single screen, but also used for live theatre. There is still a stage which is used for theatre now.

Opened as the Regal Cinema on 2nd December 1935, seating was provided for 982 on a stadium plan, with a stepped section at the rear, rather than a conventional circle. The proscenium is 35 feet wide and there is a stage. It was designed by an Australian named Smith, who was working for the Bristol based William Henry Watkins. Externally, it has a slender fin-tower on the left and the name ‘Regal Cinema’ on the facade, in stone, in an Art Deco style script. There was a coloured lit fountain in the foyer and it had a cafe for the convenience it its patrons. It was independently operated, later becoming part of Cornwall Cinemas chain, then Jackson Withers and briefly The Rank Organisation, before going independent again.

In 2007, the exterior was renovated back to its original splendour and additional screens added in adjacent properties. One being a luxury screen with leather seating and a licenced bar.

I’ve updated the street view to show the back of the cinema as the front is pedestrian so google’s car wouldn’t have managed to get a good picture of the building. The side image shows just how big the cinema is.

We are delighted to announce that a major refurbishment of the Regal Redruth will commence at the end of April this year. This is the third major stage of investment by Merlin Cinemas in recent years in this important local amenity, and will bring all the present existing auditoria up to a modern standard, as well as creating two more extra screens and modernising and completely refurbishing the present large cinema – theatre, with new stage facilities and a vastly improved auditorium.

The project will also include the reseating of all the screens, the installation of new digital projection equipment and sound systems to all cinemas and further improvements to the general public areas.

The cinemas will re-open in phases, as and when they are completed; the first screens should be ready in July; with a reopening of the whole building scheduled for early December this year. When complete the complex will offer five dedicated cinemas and additionally a 500 seat cinema – theatre with 3D and modern stage facilities intended to bring regular live entertainment from a wide variety of professional artists, whilst also providing a high quality and affordable venue for the many talented local performing organisations, some of whom have always regarded the Regal as their home, and who all the Regal team look forward very much to welcoming back.

Over recent years the cinema has seen the conversion of two adjacent properties to provide the space for the Regal Bar and Restaurant, new toilets built, as well as a modern commercial kitchen and company offices whilst the main building has also had a major structural refurbishment, a new roof, signage and redecoration and a modern luxury licensed screen has been installed above the bar restaurant, all of which will remain open whilst the other improvements take place.

This project follows on from the companies brand new five screen Phoenix Cinema and Bar Restaurant in Falmouth which since opening has proven both popular with cinema audiences and a great commercial success attracting almost 300,000 people in the first two years. Merlin Cinema now has the opportunity to bring their cinema facilities in Redruth, up to a similar standard, with greater choice and more comfort.

The Regal Redruth serves the largest conurbation in Cornwall and benefits from easy parking being next to the large modern and well lit town centre New Cut car park, which is free in the evening. The cinema and theatre is just two minutes off of the A30 and is expected to double its annual attendances when the project is complete, attracting audiences to Redruth from throughout West Cornwall and beyond for both cinema and live shows.

I might be wrong, but I think there are only four screens.

Three in the original stadium auditorium (two smaller screens in the raised section at the back and a larger one, which uses the original pronescium) I am not sure if the seating arrangements listed above are still correct (600, 171 and 121)

Additionally, a licensed screen has been added in adjacent building as mentioned above (this building also houses the Regal Bar/Cafe.

This is one of my favourite cinemas and I am really looking forward to seeing the renovations when it reopens later on in the year.

I am so pleased this building has been preserved in all it’s art deco glory. Even as a child it was hugely impressive and for many years I feared it would be demolished. There can’t be many left like this.