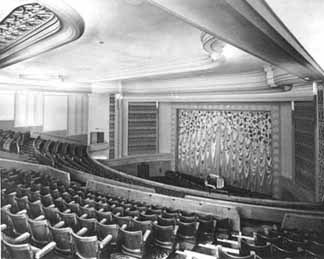 Chester’s last super cinema the Regal Cinema, built on Foregate Street on the corner of Love Street, opened on Saturday 30th October 1937. The screening was to an invited audience only. The opening attraction was “Slave Ship” and from the Monday a second feature was added “Turn Off the Moon”. The 1,973 capacity cinema had 1,196 seats in the stalls and 777 in the circle. It was designed by Associated British Cinemas(ABC) in-house architect Willam R. Glen. The Regal Cinema was equipped with a Compton 3Manual/6Rank organ, played in the opening week by Wilfred Southworth. For many years after, Norman Shann was the regular organist.

The projection room was equipped with Ross and Western Electric Mirrorphonic sound. Later, Westar was installed, followed by Philips FP20s. The Regal Cinema was equipped for 3D screenings, and on the 10th August 1953 “House of Wax” was played. In 1959, the name Regal was dropped and it became ABC. In the early days Ardente deaf aid equipment was a feature. This was used in many cinemas.

In the 1960’s the ABC began to sell microwaved food. The kitchen was situated in the foyer area and was called the Gingham Kitchen. During the 1950’s and 1960’s many pop artistes appeared live - the screen flown for this purpose. Projectionist from day one in 1937 was Hughie Jones. His son and daughter also worked at the theatre.

EMI bought ABC in 1969, and in 1980 the company turned the cinema into two cinemas, situated in the balcony area with seating for 470 and 252. An EMI Bingo Club occupied the former stalls seating area. Later, Coral took over the bingo. Projection was now operated using a non-rewind (cakestand) system. In 1987, Cannon Group took the helm, closing it on 16th December 1990 with “Ghost” in screen one and “Exorcist 3” in screen two. The building remained closed for nearly five years, opening as a Brannigans nightclub on 6 October 1995.

Contributed by DAVID A. ELLIS
Get Movie Tickets & Showtimes

I began my career at this cinema on 8th April 1962. The Manager was Douglas Baker. The projection team was headed by Hugh Price Jones (the Chief), Charles Jones (2nd), Derek Moore (3rd), Ronnie Evans (4th), and 2 probationers- Geoff Williams, and myself, Peter Davies.
The training of the projectionists at this cinema was both intense and thorough in theory and practical application. A room was set aside near the stage end for the projectionists to complete their weekly course work. The projection suite of rooms was well maintained and immaculately presented, which set the standard that I continued with throughout my 47 years in the cinema business.
On Sundays, films carrying an “X” cert, or ones deemed unsuitable for showing on the day of rest, were replaced with one day only films such as “The Incredible Shrinking Man” or “The Blob”, which were usually shown to full houses of 2,016 (the seating capacity increased from the original figure of 1,973.
During 1963, the cinema had a major refurbishment, which took over three months for the redecoration alone. The ornate plaster work was hand painted by specialists in gold, beige, coffee, and green. New seating, drapes and carpets throughout completed this stunning transformation.
In line with many large cinemas of that time, it was decided to pursue live stage shows once or twice a week. A major problem at this cinema was that there was no grid in the stage roof to enable the huge screen frame to be lifted (flown). Therefore, towards the end of 1963 work began to remove the original timber beams in the stage roof, replacing them with steel girders that would enable the complicated counter balance gear to be installed so that the screen could be lifted a distance of 17 foot from the stage, also several lines/barrels could be hung to attach borders, legs, spot bars and lighting battens. The stage shows were a success, and included not only pop groups, but local productions and ballet. Behind the scenes it was difficult as although the stage was wide, it lacked depth. Often it was described as a long corridor. Artists having to cross over outside backstage, as there was not enough room between the final back cloth and the stage wall. The stage shows continued into the 70s.
The Gingham Kitchen that was opened in the entrance hall during the mid 60s was the first premises to use microwave cookers in the UK, and was featured on Pathe News titled “Cooking by Radar”.
The cinema was in general, well maintained during this decade and into the 70s. A poorly designed conversion took place which removed the character of this once triple A grade cinema.
When Associated British Cinemas sold the circuit, I decided to move across to Chester Odeon in 1971 where I took charge as Chief Projectionist in 1977. I have remained with Odeon to the present day having worked at several Odeons around the North West, including the opening of Bromborough & Wrexham (2) multiplex cinemas where I am at present Technical Manager.

The first Sunday show at the ABC Regal was ‘Spy In Black’ and ‘No Time To Marry’ on 3rd November 1940.

I have just found this site… a real trip down memory lane for me. I used to work there as a trainee manager under Doug Baker before moving on to the ABC Deansgate in Manchester. Quote from above …The Gingham Kitchen that was opened in the entrance hall during the mid 60s was the first premises to use microwave cookers in the UK, and was featured on Pathe News titled “Cooking by Radar”… if you have seen this then you have seen me, I was the “Star” of the day.

I did Relief Manager duties here in the 1970’s and got lumbered to do the Advance booking for 2 shows “Morecombe and Wise” and “The Bournemouth Symphony Orchestra” At that time on our zone there was only a few of us that could do the old Moss Empire Booking System..