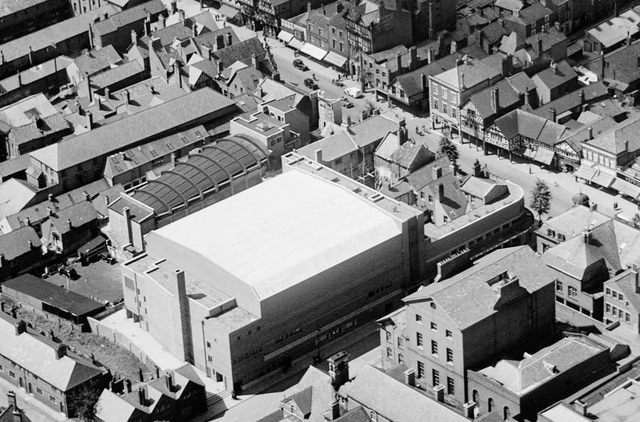 Chester’s only news theatre, the Tatler News Theatre opened for business on 2nd December 1936. The cinema, which was in Foregate Street, was owned by Chester (Times) Theatres Ltd, run by a Mr Corry Fennel. The company also ran shows in Manchester and Leeds.

The cinema was designed by J. W. Barrow for Warrington architects William & Segar Owen. The building, which cost around Â£20,000 to build had a large long foyer. On the walls were frames holding photographs from forthcoming attractions. On show were four samian-ware vessels, discovered during the sinking of the foundations.

A winding staircase led to the balcony lounge, which was small and housed two couches. The auditorium was long but not very wide. Footlights and vertical battens at the side of the stage originally provided screen lighting. The proscenium was 22 feet wide. Later, after a re-fit under Classic Cinemas management, proscenium lighting was beamed from the balcony. Auditorium lighting was housed in coves, and the curved ceiling had a sky blue lighting effect. There were wide gangways, and the seats were pullman, having an armchair feel. The cinema became the Classic Cinema in 1957 and presented films that were several years old. When it was the Tatler its slogan was ‘All Chester is now going to the Tatler theatre’.

The projection room was equipped with Simplex projectors, Peeless carbon arcs and RCA sound. At the time of closing BTH xenons provided the illumination.

The cinema closed on 18 December 1970. The last seven day picture was Donald Sutherland in “M.A.S.H.”. The last late-night double feature programme was Dirk Bogarde in “Accident” & Carol Lynley in “Blue Jeans”. The building and adjoining properties were demolished in 1971 and a C & A store was built on the site. Later a Woolworth’s store and in 2014 a Primark store.

Contributed by David A Ellis
Get Movie Tickets & Showtimes

The first Sunday showing at the Tatler/Classic was ‘Q Planes’ on 3rd November 1940.

After C&A it became a Woolworth store. It is now a Primark store.

My Mom used to manage it back in the 60’s. (Peggy Rawson)

Peggy Rawson was a brilliant General Manager.
I worked with her there, and without doubt it was the best time I spent during my 52 years in cinemas