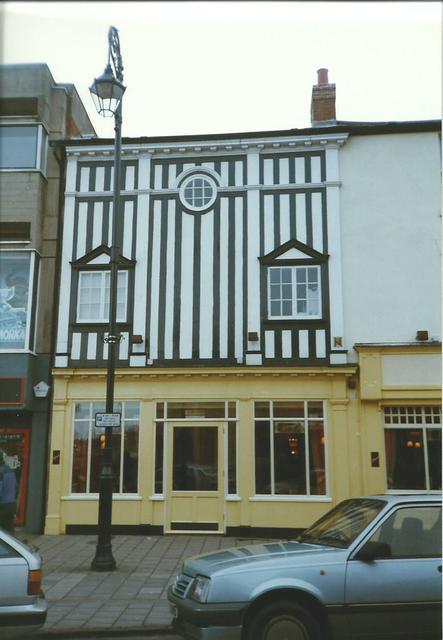 The Glynn Picture Hall opened June 19, 1911 with “Sixtus the Fifth”, and had a half-timbered facade. It was operated by the Glynn Animated Picture Co. who also operated the Glynn Cinemas in Wrexham and Shrewesbury.

The building was converted into retail use and this lasted until April 1995. It is now home to a bar named Revolution.

2006 photo.
The entrance was obviously converted from an existing shop.
Above ground floor level the front still looks like it would have done in 1911.
Note the circular window of the operating room:
View link

Opening film Sixtus the Fifth and closing film Lure of the South Seas. Named after Glynn Hill who founded Glynn Animated Picture Company with G.E. Bulford. Subsequent uses included a fruit & veg store, a car showroom, House of Holland store, and of course the bar, previously Edwards. It was gutted by fire at some point and was indeed rebuilt as the previous comment suggests.

The cinema was never equipped for sound and there was an orchestra called Hillman and Glynn. The Gaumont opened in March 1931 and this cinema closed in September 1931.