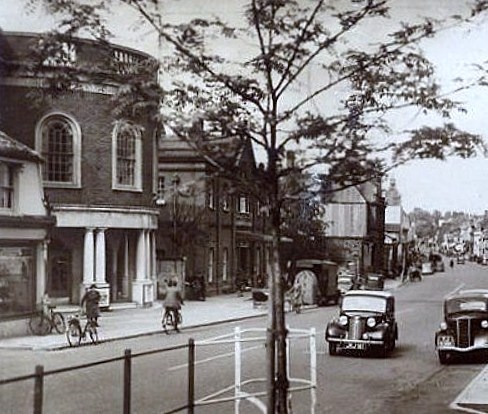 Located in Newmarket, Suffolk. The Doric Cinema opened on 1st March 1937 with Will Hay in "Good Morning Boys" and Yvonne Arnaud in "The Gay Adventure". Located at the end of the High Street, to the right of the Memorial (Town) Hall and diagonally opposite the Kingsway Cinema.

It was built for and operated by local independent company Doric Cinema (Newmarket) Ltd. The cinema had a 35 feet wide proscenium, a stage 35 feet deep and six dressing rooms. There was a cafe for the convenience of patrons.

It was equipped with Cinemascope, the first film shown in that process was MGM’s "Knights of the Round Table" starring Robert Taylor on 19th January 1955, and this was followed by Richard Burton in "The Robe". The Cinemascope screen was 30 feet wide.

The Doric Cinema closed on 27th July 1964 with Bette Davis in "Dead Image"(Dead Ringer) and Robert Hutton in "The Secret Door". The building then stood empty and unused for 15 years until it was renovated and re-opened in around 1979 as a cabaret & variety club, known as the Cabaret Club. In 1987, a special screening was held in the building to celebrate the 50th Anniversary of its opening when a Pathe Newsreel film of the original opening was shown, together with a film starring Will Hay.

The Cabaret Club continued into around 2000 and since then the building has been converted into a pub known as The Orange House. It then became a nightclub named Aura, but this closed in 2015.

The building is currently closed having finished as the Aura nightclub – planning permission for flats recently refused (mainly demolition), local desire to return it to arts use.