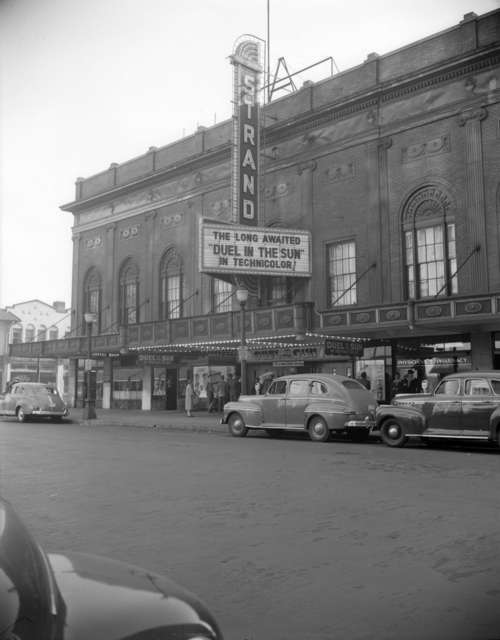 Opened on August 13, 1920 as the Allen Theater, one of the first super deluxe movie houses in Canada. The opening movie was Norma Talmadge in “Yes or No”. It was promoted as the finest and modern theaters in the country. It cost $300,000 to build and in just six months. After only just one year, this grand theater went bankrupt and was purchased for a nickel on the dollar.

At one point in 1932, the theater went dark for a year due to the depression. It had many modern amenities including a built-in cigarette lighters and boasted sculptures by Charles Marega.

On March 6, 1958 it featured the movie “Windjammer”, presented in Cinemiracle. Closed in 1973, there was much opposition to the Vancouver Centre project at the time because it mean’t the destruction to the Strand Theatre, The Birks Building and the loss of an iconic restaurant called Scott’s Café. The developers would not budge on the design and demolition came quickly in 1973. The Birks Building clock was restored and relocated to a new location and a White Spot Restaurant, which was part of the Vancouver Centre, is located where the Strand Theatre once stood.

An article titled “Some Problems in Theatre Construction” in the July, 1921, issue of the Canadian journal Construction is illustrated by photos of the Allen Theatre in Vancouver. The facade, entrance, foyer, mezzanine, balcony, and auditorium are all depicted. Judging from the photos, I’d consider the architectural style to be predominantly Adamesque rather than Greek Revival.

The article is available online from the Internet Archive (for those whose browsers might not be compatible with that format, you can select other formats from this page.) Navigating the Internet Archive’s online reader can be tricky, until you get used to it, which is why I usually link to the easier-to-use Google Books when they both have the item available, even though Internet Archive provides far better page scans.

Interior photo from the City of Vancouver Archives: View link

An exterior view of the Strand from 1948: View link

Does anyone know the make of organ

The (now demolished) White Spot was on the 500 block of W. Georgia, not the site of the Strand.

Sorry but Scott’s Cafe was located at 722 Granville street (Reference: Vancouver Public Library) next to Birks Jewellers. And the White Spot took up a portion of the site on Georgia Street where the Strand theatre originally was. I enjoyed several films at the Strand and I became engaged in Scott’s. Then we went next door to Birks to purchase my engagement ring. Hope this helps. Sorry, but there were two Scott’s cafes. The one that existed on Granville Street until the 70s,and its 1970s replacement on the south side of the 500 block of West Georgia between Seymour and Richards.

As I said before, it was this second Scott’s that became a White Spot.

There was never a White Spot on the site of the Strand Theatre, which occupied the southwest corner of Georgia and Seymour. This corner is now occupied by the Scotia Tower.