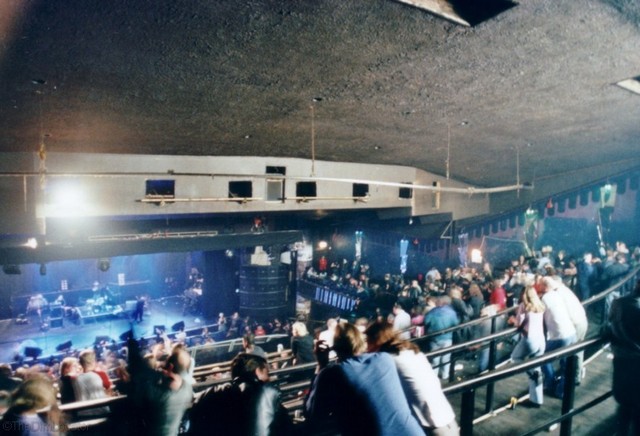 This was a conversion by noted cinema architect Edward A. Stone, of a former Crosse & Blackwell pickle factory. It opened as the Astoria Theatre on 12th January 1927 with Ivor Novello in “Triumph of the Rat”. Projection was in the rear stalls from beneath the single balcony. A Compton 3Manual/8Rank theatre organ was installed that was opened by organist G.T. Pattman. There was a medium sized stage and dressing rooms. There was a ballroom located in the basement and a cafe in the balcony foyer area.

The Astoria Theatre was the first of a small chain of Astoria theatre’s in and around London built for Arthur Segal. In 1928 it was taken over by General Theatres Corporation, who were taken over 2 months later by Gaumont Theatres. By the late-1930’s it was operating as a weekly-change cinema, screening concurrently with the Metropole Cinema, Victoria or the New Victoria Cinema, Victoria (both Gaumont operated cinemas). The Astoria Theatre was closed at the height of the London Blitz from mid-September to 4th November 1940. By 1948, it was playing weekly releases that were on the ABC cinema chain, concurrent with the Tivoli Cinema on the Strand.

It became a first-run West End cinema from 6th December 1956 sharing screenings of the Dean Martin & Jerry Lewis comedy “Hollywood or Bust” with five other Rank Organision cinemas in the West End. It was modernized in early-1957 and became a Roadshow theatre with seating for 1,357, opening on 2nd July 1957 with “Around the World in 80 Days” presented in 35mm, followed by the World Premiere of “Solomon & Sheba” on 27th October 1959 and “The Alamo” from 27th October 1960. Seating was reduced then from 1,650 to 1,121. The 70mm roadshow presentation of “West Side Story” broke all advance ticket sales at the Astoria from 27th February 1962. The Astoria Theatre hosted a Royal World Premiere of “Fall of the Roman Empire” on 24th March 1964, and it was redecorated especially for this film in a Roman/Italian Renaisance style. In 1965, a 70mm presentation of “Those Magnificent Men in Their Flying Machines” has a roadshow run which was followed by a Royal Premiere of “The Agony and the Ecstasy” on 27th October 1965 which also had a roadshow run presented in Todd-AO.

The Astoria Theatre reopened on 17th December 1968 with “Chitty, Chitty, Bang, Bang” with a new plain auditorium with seating for 1,121. In 1969, the Astoria Theatre advertised itself as a Cinerama theatre when it played a 70mm print of “Krakatoa-East of Java”. In January 1970 a 70mm print of “Paint Your Wagon” had a long run of over a year, which was followed by “How the West Was Won” in 1971. However the supply of big production films in 70mm eventually dried up and the Rank Organisation began programming the Astoria Theatre with revivals and first run double-bill programmes of inferior films. In 1975, the Rank Organisation were officially publicising the Astoria Theatre as ‘The Luxury House of Adult Movies’ when the first programme of this type to play in a major West End cinema was “Love Play-Swedish Style” - ‘A sizzling sexpot learns the rules of the game’ and “The Loves of a French Pussycat” - ‘Revealing all the bare facts’.

The Astoria Theatre closed as a cinema on 28th February 1976, and was altered again to become a live theater with hit shows such as “Elvis-The Musical” which opened on 28th November 1977, followed by “Beatlemania”, but other shows were not so successful. The Astoria Theatre closed in 1979 and remained ‘dark’ until it was re-opened on 15th June 1982 as a theatre-restaurant venue, the opening show being “Wild, Wild Women”, which proved to be failure. After a period of darkness the next show produced at the Astoria Theatre was in 1984, when Howard Goodall’s musical “The Hired Man”, which was produced by Andrew Lloyd Webber, ran for 164 performances(5 months). This was followed by a production of “Lennon” which was not successful. The theatre then became a live music venue which continued for many years.

The former ballroom in the basement became a gay disco known as Bang, and then became G-A-Y, transfering into the main theatre on several nights a week, when it became a nightclub, and live music venue. Over the 15 years that G-A-Y operated, it hosted live performances from artists such as Kylie Minogue, Madonna, Spice Girls, Cyndi Lauper, Enrique Iglesias, Mariah Carey, Bananarama, Christina Aguilera and S Club. The Astoria Theatre building was under threat for many years, scheduled for demolition when a new Tottenham Court Road Underground Station is constructed as part of the CrossRail project.

However, this project was on hold for several years and was only given the go-ahead in October 2007. G-A-Y moved out of the building on 26th July 2008, and transfered itself on 18th October 2008 to Heaven nightclub in Charing Cross. A short lease was taken out at the Astoria Theatre by new operators, as another gay nightclub named OMO, which opened on 1st August 2008.

A Compulsory Purchase Order was served on the Astoria Theatre and surrounding buildings on 17th October 2008. The Astoria Theatre (as OMO) closed on Wednesday 14th January 2009. Demolition commenced in early-June 2009, and was completed in late-July 2009.

In April 2012, it was announced that once the new Crossrail station has been completed, a new 350-500 seat live theatre will be incorporated in the plans for the new building to be erected on the site.

A number of photos of the Astoria taken over the last two decades posted here on CT and elsewhere –(such as this one: View link – show a small vertical sign attached to the extreme right hand side of the Tottenham Court Road frontage. The sign reads “Astoria Theatre” vertically and “123” horizontally at the bottom. The sign would appear to be over the entrance to the lower level where the former ballroom/Bang/Astoria 2/G-A-Y nightclub was. However, most recent and older London guides I have give 165 as the address for the Astoria 2. Is that “123” an address number or was there once a triplex theater on the lower level?

I too have always been intrigued (call it puzzled) by the ‘Astoria Theatre-123’ sign on the building. The original main auditorium was always one space, and the ballroom in the basement was always another single space.

A picture and a premiere article from the Cinerama Topcities site which shows the Astoria during its one and only use as a Cinerama venue showing “Krakatoa, East of Java”: View link.

that’s an article about new theater to be built on site.

The Astoria most certainly did not show “Around the World in 80 Days” in 70mm! 70 mil did not appear in the UK until “South Pacific” opened at the Dominion in 1958. 80 Days was shown at the Astoria in 34 (yes FOUR)mm. This was a process called Cinestage involving an anamorphic print with a 1.56:1 squeeze giving a screen ratio of 2.2:1 (like Todd AO). The reason for the 34mm print was British quota. All cinemas had to show 30% British films in any one year, which would have precluded a long roadshow run. However, the rules only applied to 35mm film so 1mm was shaved off the print! Apparently at least twice during the run Board of Trade inspectors visited to make sure they really were using a 34mm print. Later, of course, 70mm presentations were also exempt from quota which is how cinemas like the Astoria, Dominion, Metropole and others could present long runs of “foreign” films. Unfortunately, some British films (notably “Zulu” were denied a 70mm run in the West end so that the film could contribute to quota obligations.

Probably the Astoria’s longest run of all was “Paint Your Wagon” (blown up to 70mm.) in the early ‘seventies. Paramount “four-walled” the cinema in order to showcase their musical-western and it ran for over a year. For this, and the revival of a single-lens version “How The West Was Won”, a six-sided screen was used which, for me at least, was unsatisfactory. The reason for the unconventional image was the stalls level projection room. By this time, the proscenium had disappeared behind a large and deeply curved screen frame complete with semi-circular curtain track and further curtaining concealing the side walls. The screen was huge but, following its installation, in order for the wide beam to be accommodated, the already cut-away front of the balcony would have had to be even more cut away and, as this meant losing more top price seats, Rank refused to allow it. The resulting compromise resulted in a “carpet to ceiling” 70mm. image with the top corners chamfered and masked as such. I would have preferred a slightly smaller, rectangular image. 'Scope and wide screen product were able to be screened normally with a four-sided image.

As “Paint Your Wagon” was my first visit to the Astoria, I do not know when the “six-sided” image first appeared but my best guess would be that it followed Rank’s “zing” treatment which produced the plainer auditorium in time for “Chitty Chitty Bang Bang” to open there following its gala premiere at the Odeon, Leicester Square in December 1968.

Photo today of the Astoria’s presentation of How the West was Won in its screen version referred to above. Date of showing: from 26 November 1971 for the Christmas/New Year 1971/72 period.

Similar info of Paint Your Wagon and other presentations to follow in due course.

Regarding the conversion prior to Chitty Chitty Bang Bang, the previous presentation at the Astoria was Half a Sixpence which ran from its premiere there in 1967 to 3 October 1968. Between then and December 17 the theatre was closed for refurbishment.

Goodshow do you have any photos of the 70mm screen at the Astoria prior to Half a sixpence and when it became a Cinerama screen in 1969?

The longest run at the Astoria was that first roadshow presentation, Around the World in Eighty Days, which ran for 106 weeks. West Side Story ran for 94 weeks with Paint Your Wagon next up at 79 weeks and then The Fall of the Roman Empire at 70 weeks. Nothing else ran for more than a year, next best being Half a Sixpence at 41 weeks. It is rather surprising that the Astoria’s fortunes declined so rapidly, especially in view of Rank’s expensive refurbishment in 1968. Even the Metropole, Victoria outlasted it.