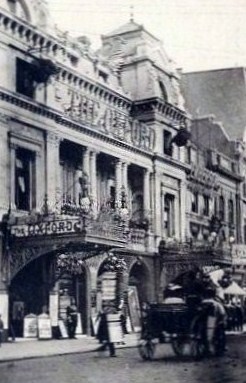 Located in the West End of central London on the north side of Oxford Street close to the junction of Tottenham Court Road. This was the 4th Oxford Music Hall to stand on the site. It was opened on 31st January 1893 with a music hall programme which starred Marie Lloyd singing “Oh Mr. Porter”. The theatre had a second entrance around the corner on Tottenham Court Road. Designed by noted theatre architectural firm Wylson & Long, seating inside the auditorium was provided for 375 in the orchestra stalls, 153 in the pit stalls, 154 in the dress circle and 365 in the gallery.

In 1913, it changed programming policy and dropped music hall in favour of presenting revues and musicals. In 1917 C.B. Cochran took over management and it was renamed Oxford Theatre in 1918. In January 1921, it was re-named New Oxford Theatre and alterations had been carried out to include four stage boxes and a redecoration. The first presentation in the ‘new’ theatre was a revue “The League of Notions” starring The Dolly Sisters, which ran for 360 performances. A 1921 Christmas pantomime “Babes in the Wood” was presented, again starring The Dolly Sisters.

In 1922, the New Oxford Theatre went over to screening films for a while. In 1923, it was back to live theatre use presenting French plays, and the American musical “Little Nellie Kelly” which ran for 265 performances from July 1923. In 1924, C.B. Cochran presented the Old Vic Shakespeare Company’s productions of “The Taming of the Shrew”, “As You Like It”, “Hamlet” and “Twelfth Night”.

The New Oxford Theatre was closed in May 1926 after a short run of the flop musical “Turned Up” presented by the Denville Stock Company.

The building had been sold to J. Lyons catering company, and was demolished to build a Lyons Corner House restaurant building, which opened in 1927. The Lyons Corner House was closed in 1967, and Classic Cinemas opened their 4-screen (later 5-screens) Classic Oxford Street in the basement in 1977, last operated as the MGM Oxford Street (which has its own page on Cinema Treasures). That building has been used as a branch of Virgin Megastore & later Zavvi selling cd’s and DVD’s, and in 2013 is a branch of the Primark clothing store.