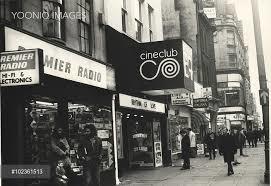 The Grand Central Picture Theatre opened on 12th February 1909. It was just two doors away from the Gaiety Picture Theatre (later Sphere News Theatre). It had a long narrow auditorium, with all seating on a single raked floor.

In May 1928, it was re-named Bijou Cinema, and it was closed in 1931. Converted into retail use, this continued for several decades.

In 1969, it was purchased by the Cinecenta group and refurbished into a luxury ‘members only’ cinema, playing uncensored Continental sex films. It re-opened on 11 September 1968, as Cineclub 24, with the Swedish sex film "As the Naked Wind From the Sea" starring Hans Gustafsson. The ‘24’ in the name derives from its street address on Tottenham Court Road. With a reduced seating capacity of 250, it had luxury armchair style seats, and it was a very popular cinema, due to its central location and its ambience. It was allowed to screen uncensored films, due to its policy of membership only, and being located within the boundry of Labour controlled Camden Council, rather than the more prudish (Conservative run) Westminster City Council, which covers most of the West End of London.

The Cineclub 24 was closed on 24th December 1976, due to planned redevelopment of that section of Tottenham Court Road, and a parade of shops with offices above, was built, currently the Sony Centre Galleria is at this exact address. The southern part of the redevelopment claimed the almost adjacent former Sphere News Theatre, while the northern part claimed the former Carlton (Berkeley) Cinema and the Majestic (La Continental) Cinema.