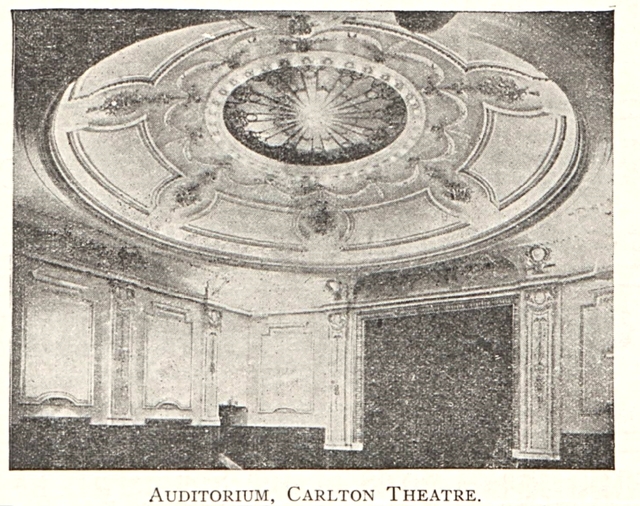 The Carlton Picture Theatre opened on 17th October 1913 with “Germinal”. It stood almost adjacent to the north of the Majestic Picturedrome (later La Continentale Cinema) on the west side of Tottenham Court Road.

Seating was provided for 800 on one floor and there was a 20 feet wide proscenium opening. In the centre of the ceiling was a large decorated dome that was back-lit from its rim. There was a dance hall located in the basement.

The Carlton Picture Theatre closed in late-October 1939 due to lack of business when World War II began and it didn’t re-open until May 1943 when it become part of the Marks Circuit Cinema of Manchester. After the war it was closed briefly for redecoration in early-April 1948 and re-opened on 24th April 1948 with a new name as the Berkeley Cinema.

It was operated for many years by Kenneth Rive’s Gala Film Distibuters, and was often referred to as the Gala Berkeley Cinema. From 3rd May 1983 the former basement dance hall (which became Rectors nightclub and then the Blarney Dance Club) had been converted into a second screen Barkeley 2, seating 183.

Sadly, this entire section of Tottenham Court Road was scheduled for a huge re-development and the Berkeley Cinema, together with its neighbour La Continentale Cinema were closed on 31st August 1976.

The new developement included a new three-screen cinema complex which opened as the Classic Cinema in July 1981. Later becoming the ABC and today operating as the Odeon Tottenham Court Road. These are located on the site of the former La Continentale Cinema.

Side-by-side photographs of the original Carlton Picture Theatre/Berkeley Cinema, and the current Odeon on the site today:
http://flickr.com/photos/kencta/2083900013/

Sorry, but the Flickr photo montage in the above link is wrong.

The Carlton cinema (later Gala Berkeley) was on TCR at the north side of Stephen St which is now bridged. The site of the front of the cinema is now largely the paved area (the building line was moved back) and some retail units (T2, Chocolat, and Leon). The BFI building on Stephen St is on land abutting the rear of the site of the Carlton’s auditorium. The Odeon entrance shown in the photo is at the north end of the TCR redevelopment – approximately where the entrance to the Majestic/Continentale cinema was situated. Two old buildings remain north of the Odeon and Ben & Jerry’s – ‘YouMeSuchi’ and ‘iSmash’.