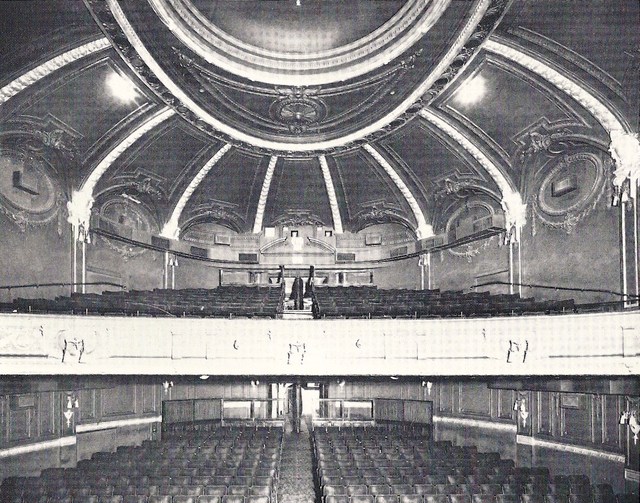 One of the oldest surviving cinema buildings in London’s West End district, and still retaining most of its original decoration, the Rialto Theatre is an amazing building.

Externally the tall narrow façade resembles many American theatres but inside is a riot of Edwardian plaster-work designed by Horace Gilbert. The main architect was Hippolyte Blanc. It opened as the West End Cinema Theatre on 18th March 1913, with seating for 452 in the stalls and 232 in the circle. The auditorium impressed one American visitor that he used the plans to create a nearly exact replica of the auditorium in the Parkway Theatre, Baltimore, MD in 1915. There was a small café located upstairs on the first floor of the building behind the tall windows of the façade. In the basement was the Elysee Restaurant, which later became the Café de Paris nightspot. The West End Cinema Theatre was the first cinema in London’s West End to have neon signage, which was installed soon after its opening in 1913.

Following ‘a complete remodel’ it reopened on 28th April 1924 with a UK premiere screening of “A Lady of Quality” starring Virginia Valli. It was renamed Rialto Cinema, and a small pipe organ was installed soon afterwards. From the late-1920’s until the early-1930’s it was operated by the European Film Company, the British subsidiary of Universal, to showcase Universal Pictures. In January 1931 it became an arthouse cinema, premiering sub-titled films such as “The Blue Angel” and “A Nous La Liberte”. On 27th March 1933 it became a newsreel theatre operated by Albert Clavering of the Clavering and Rose circuit.

It was taken over by the Associated British Cinemas(ABC) chain in 1934, and they operated it until around 1940, when it was taken over by an independent operator. In March 1941, a German bomb penetrated the building and exploded in the Café de Paris beneath the auditorium, which killed many people. The Rialto Theatre remained closed until repairs were carried out and it re-opened on 7th September 1942 under the Lou Morris cinemas chain. A Compton Theatrone 2 Manual organ had been installed, which had come from the Ritz Cinema, Sheerness, and was played by organist Florence de Jong. The Rialto Cinema was closed in January 1946, and was taken over by Alexander Korda in August 1946, to become an art house cinema. It re-opened after refurbishment on 29th November 1946 with the gala British premiere of “Les Enfants du Paradis”, which played for many months. Renovations were carried out in 1949 to the plans of architect George Coles, when it was leased to the film distributor Films de France, and continued to showcase French films.

In 1954, it was taken over by 20th Century Fox, and they employed architect Samuel Beverly to make alterations to the proscenium to enable CinemaScope to be screened, and the Rialto Theatre was re-opened on 15th October 1954 with “Three Coins in the Fountain” which had moved over from Fox’s Carlton Theatre in the Haymarket. Further alterations were carried out by architect Leonard Allen in August 1959, which included the installation of a large sign-box on the façade, and giving the orchestra stalls a ‘reverse rake’ to improve sight-lines. The Rialto Theatre re-opened with Fox’s “Blue Jeans”. On 10th June 1965 the World Premiere of “Repulsion” was held at the Rialto Cinema. On 29th December 1965 the Gala Premiere of “Thunderball was shared with the nearby London Pavilion. 20th Century Fox operated the cinema until 1977, when it was taken over by the Brent-Walker group operating as Focus Cinemas. There were plans proposed to convert to a shopping arcade in 1978, but the cinema continued successfully until Brent Walker’s lease expired in January 1982 and the final films screened were "Carrie” and “Force Five”. The cinema then lay derelict, with only the Café de Paris operating in the basement.

Eventually the Rialto Theatre was restored and used as the Fashion Café which folded very quickly. It become a Chicago Rock Café in 2002 which didn’t last too long either. It has now been converted into a casino named the Hard Rock Casino, retaining all the decorative interior from its original cinema days. The Café de Paris in the basement was permanently closed on December 20, 2020 due to the Covid-19 pandemic.

It is one of London’s most unknown, yet most important cinema buildings and is a Grade II Listed building.

The Rialto Cinema can be seen on the left of this night-time view of Coventry Street in November 1955:
http://www.flickr.com/photos/allhails/2808666144/

The derelict interior of the Rialto Cinema, photographed in 1998:
View link

A vintage photograph from April 1955, showing the Rialto Cinema. The Peter Robinson store was later demolished and the Swiss Centre built on the site. In 2009, this too was demolished and a hotel has been built on that site:
http://www.flickr.com/photos/allhails/5154525536/

The seating was removed. and ended up in a short lived cinema in Birmingham called “The Original Cinema” Saltley..

Have found a picture of the auditorium….

I The 20’s and early thirties The Cinemas was Operated by ABC Cinenas. The Manager that I trained with at The ABC Savoy Walsall. Was assitant Manager at the Commodore Hammersmith and did management relief at Rialto

Compare the mamzing similarity of the Rialto coventry st london and the Parkway Baltimore, USA.

I saw the cinema recently (now a Casino) and the interior appears to be intact as I remember it, pity it is not a cinema anymore.