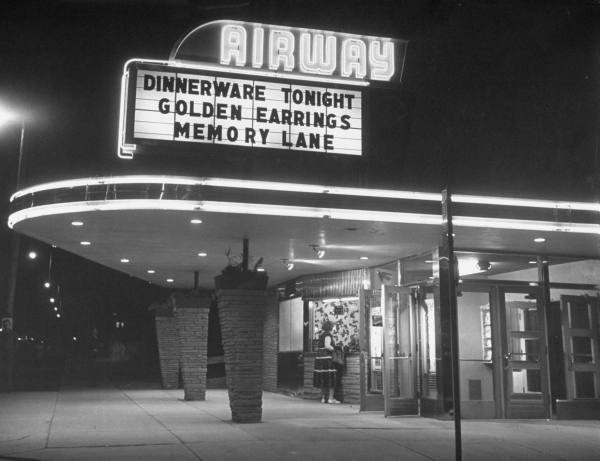 Every American city had scores of theaters by the time the craze for building them ended with the Great Depression, but Milwaukee was unusually gifted for a city its size to have the caliber of such as the Pabst, Warner, Egyptian, and Oriental.

For that city, however, at least one more theatre would rise to lend a unique note of distinction: the Airway Theatre.

By 1949 when the Airway Theatre opened, most returning servicemen were interested in things other than theatres, but not the son of an owner of a remodeled photoplay ‘parlor’ of 1910 (the Aragon), Eugene Goderski. He envisioned a movie house far different from what anyone had seen before: a ‘Quonset hut’-shaped building (semicylindrical).

Perhaps he had sat in such a temporary sheet metal cinema while overseas, but his design for the Airway Theatre included some 600 seats on one floor under a curving walls-ceiling expanse of sky blue gypsum tiles on a conventional superstructure. The walls were painted with images of aircraft through the years, done in a ghostly phosphorescent white, but they stood out when seen in the glow of the blue neon tubing bordering a central soffit which continued the ductwork. Reportedly, this blue glow was wonderful during the movies, but during the intermissions a white light came from small wall fixtures.

The name ‘Airway’ and the entire world-of-flight theme was no accident since Mr. Goderski had grown up just blocks from Milwaukee’s airport and his fascination with flight (he was an airman in the South Pacific theatre of war) led to his later hanging painted plastic model aircraft from the lobby’s coved ceiling.

An entire wall of the lobby featured a floor-to-ceiling mural of a WWII aviator greeting one from the dawn of the age who was depicted in coveralls, goggles, and a white silk scarf around his leather helmet. There was no stage since it was never intended to be anything but a cinema, and the long curving roofline did little to announce the location of a cinema on its location only a mile from the airport.

To make its purpose clear on the brick, limestone, and stainless steel exterior, Poblocki sign company of Milw. (‘till then the re-facer of many theaters in Wisconsin and the Mid-West) built the first of their modern "modular" signs with the attraction board, and the name sign of different masses upon a perforated pylon of dark blue porcelain coated steel, and all outlined and filled with blue neon, as was the stainless steel of the canopy below.

An outline of chaser bulbs was added sometime later to increase the visibility to young couples going south on the busy street to find new homes in new suburbs, since the ‘baby boom’ was then beginning.

Opening night attracted SRO crowds to witness the Chairman of the Town of Lake (a southern suburb of Milwaukee later to be annexed) give the dedicatory speech along with architect Myles Belongia who also did the Majestic in the suburb of Cudahy and many theater alterations in this part of the state, as well as many churches.

The cinema struggled being fourth-run on the distributor’s list until the Goderskis saw ‘the handwriting on the wall’ in 1966 when its parking lot was often empty of cars, and sold the building and land to a local bank which demolished it for its branch office which stands there to this day.

The complete story of this unique theater can be read in the 4th Quarter, 1995 issue of "Marquee" magazine of the Theatre Historical Society of America (www.HistoricTheatres.org): "The Airway Theatre: One Man’s Fancy of Flight" by James H. Rankin.

A woman working at the Bay View library related to me that she had attended the AIRWAY many times in her youth both for movies and also on Sunday mornings when it served for years as a church. Whether or not this was the Goderski’s congregation, or whether or not such services produced rent for the AIRWAY is unknown.

According to Larry Widen and Judi Anderson’s book ‘Milwaukee Movie Palaces’ (1986) the architects of the Airway Theatre were Peacock & Belognia. It operated from 1949 until 1967 and seated 550.

The architects “Peacock and Belongia” occur on the 1946 Application for Building permit, but nothing came of that permit for some reason, and the 1948 Application and Permit list only Belongia who had left association with Peacock in the interim. The difference in seating total is due to the difference in “proposed” seats listed on the Application, and the actual count of 600. The 50 seats in the upper balcony were not always included in the count total. It was recessed next to the projection room and was discontinued as public seating after not many years.

Here is a photo from Getty Images:
http://tinyurl.com/sf823

Myles Belongia had been a pioneer in using quonset huts for theaters, and had designed the Middleton Theatre at Middleton, Wisconsin, the first such theater in the state. It was opened in 1946.

The Poblocki Sign Company erected a number of pre-fabricated quonset hut theaters throughout the region in the late 1940s, and advertised its services as a design-build company in Boxoffice for several years. Architect Belongia’s relationship with the Poblocki company went back at least as far as 1937. In that year he was one of the partners founding a company called Porcelain Fronts, Inc., which specialized in theater modernization. Bernard Poblocki was another of the partners, according to the item about the company in Boxoffice of September 4, 1937.

Here is an ad for Poblocki and Sons in Boxoffice of May 24, 1947. It attributes the design of its prefabricated quonset hut theaters to the firm of Peacock & Belongia. The Peacock in the firm was, of course, Urban F. Peacock. I’m not sure how long the partnership existed, but it’s only ever mentioned in Boxoffice in the year 1947.

Linkrot repair. These are the new locations of the Boxoffice items in my previous comment:

The Airway Theater was located on the south west corner of the intersection of South Howell and Norwich Avenues, in what used to be called the Town of Lake – a southern “suburb” of Milwaukee.

If you looked WEST, down Norwich Ave. (prior to the construction of the freeway) you had a nice view of the awesomely TALL Art Deco style – Town of Lake City Hall, which was constructed around a central “water tower.”

I lived about two blocks west of this theater on S. 1st Place, for the first 22 years of my life. I walked past the building every day on my way to and from, school.

The Airway always had Sunday matinees, which were oriented toward the kids who lived nearby. And in the 50’s and 60’s there were a LOT of kids in that neighborhood. For 25 cents you got a few cartoons or shorts (three stooges, etc) a few previews and a DOUBLE feature. The usual “bill of fare” was some Sci-fi or horror thrillers.

What I remember most about the Airway was seeing the BEATLES movies there during the 1960’s. The manager, a GRUFF military type, crew cut – tyrant, must have rued the day that he booked those films, because nobody heard a word of dialogue over the SCREAMING of all the girls in the audience. In fact he turned off the movie, and came into the auditorium SEVERAL times to WARN the girls that if they didn’t stop screaming he would stop the film completely, and send everyone home. Which got lots of BOOO’s. It got quiet for a little while, but the screaming started all over again, after only a few minutes. The concession stand even sold – edible black licorice, BEATLES “record albums” (about 4 inches in diameter) during those movies, along with the customary theater sized boxes of Milk Duds, Good n' Plenty, Raisinets and Dots etc., not to mention the favorite – BUTTERCUP buttered popcorn.

And god forbid if you were caught “horsing around” during a movie. The ushers would shine a flashlight in your face and grab you up out of your seat, and make you pick up popcorn boxes, as a punishment. The number of boxes varied, according to the “transgression.” Some kids even got BANNED, if they were really nasty. At least until next week, when the teenaged ushers usually forgot your face among the throng of snot nosed kids.

According to my dad picking up popcorn boxes was a NOTHING punishment, becuase when he was a kid the other theaters made you pick up dead RATS. A somewhat dubious, but amusing story.

One of the most striking, yet seemingly “out of character” features of this theater was the drinking fountain ( or “bubbler” as they called it in Ma-waukee). It was located in a small niche or arch, which was decorated with a very colorful tile wall mural depicting what looked like a tropical bird and plants. It really didn’t “FIT” with the modern architecture of the rest of the building. Almost as if it had been transplanted to the Airway from a different location. Looking back, the bird may have been a PEACOCK, in honor of the name of the Architectural firm, Peacock & Belongia.

One small correction, the building was not demolished BEFORE becoming a (First Wisconsin) bank. The bank actually did some remodeling, then used the building that way for several years. It was LATER completely demolished, and a new bank building was constructed on the site. I remember because when the demolition began we “raided” the site to take some relics …as mementos. And there were bank deposit slips and bank related items in the debris, among with items which had been left over as part of the theater, like torn black velvet curtains, etc.

I must have seen HUNDREDS of movies at that theater over the years. Because in those days movies were THEEE – big thing. Let’s face it – LONG before cable, when TV was only black and white, on a “fuzzy” 14 inch diagonal screen, that had only 3 local stations (plus one PBS station and MAYBE one – UHF station …with the right antenna) going to the movies was MUCH better. Even the hokey 3-D films like “House of Wax” with those AWFUL red and green, headache causing, cardboard glasses, were still a TREAT.

For Airway 1: I live here in a small town south of Boston, Mass. and when I heard about the screaming of packed. Everytime Elvis came on the girls would start the Beatles we had something similar happen here in our 1000 seat theatre only it happened years before. It was in 1956 and our theatre was 1st run with Boston.. Love Me Tender with Elvis was playing. The theatre was packed with screaming girls(of course us boys were encouraging them. Bud K. the ass’t manager at that time would signal the projectionist to turn off the sound and he would stand up back telling everyone to shut up or he would shut down the movie and clear the theatre with no refunds. The price was I believe 35cents at that time. This reminded me so much of your story I just had to reply. It sounds real funny now. By the way the movie finished with screaming and crying and we all went home only to come back the next day and do it all over again. Thanks for the memory.