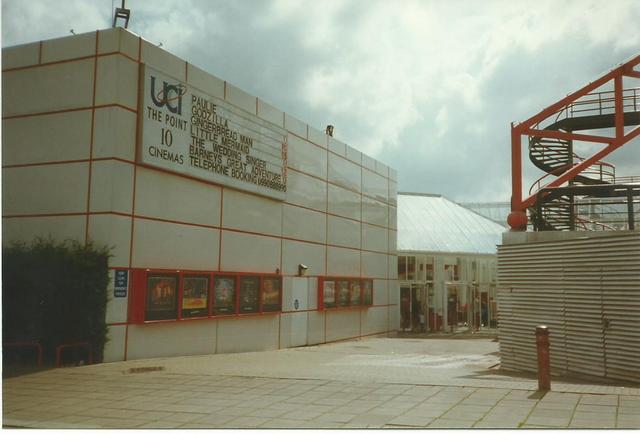 Famous in the history of British cinema as being the first purpose built multiplex cinema to be built in the UK. The 10-screen AMC-The Point opened on 23rd November 1985 with a Royal Premiere of the Harrison Ford film "Presumed Innocent" which was attended by Sarah, Duchess of York.

Built for and operated by American Multi-Cinemas, it has a foyer section, designed in the shape of a pyramid, hence the name ‘The Point’. The supporting struts were originally edged in red neon. The structure containing the auditoriums is just a plain block. Also in the complex is a Gala Bingo Club located under the cinema foyer entrance, a nightclub and cafes and restaurants.

In December 1988, it was taken over by UCI and re-named. In April 2003 it was leased to easyCinema, operated by the budget airline easyJet, when a policy of taking bookings only online and charging a minimum admission, created interest, but turned out to be a failure. In May 2006 it was taken over by Odeon Theatres. Seating capacities in the screens range from 248, down to 156.

The Odeon was closed on 26th February 2015 with “Kingsman, The Last Service” being the final film in one its auditoriums. There had been hope that the cinema would be given a Grade II Listed status due to its historical relevance and the UK’s first multiplex cinema, but it was turned down by English Heritage. It will be demolished and replaced by new shops and leisure facilities. The Gala Bingo Club (re-named Buzz Bingo Club from June 2018) was closed on March 21, 2020 due to the Covid-19 Pandemic. It was announced on 15th July 2020 that the closure would be permanent.

Milton Keynes now has a new 16-screen Odeon Stadium + IMAX, located at the MK Dons Stadium, which has an IMAX screen and two screens equipped with Atmos sound. It opened on 27th February, 2015.

FYI. MSN Entertainment News posted a story that singer Amy Winehouse was charged this Wednesday in connection with an assault at a Milton Keynes Theater last Saturday.
MSN cited media reports that the altercation took place after she heckled a performance.
Though neither theater appears to currently have live performances.
Let’s hope she wasn’t heckling a movie.

I see that there are recent remakes of of St. Trinian’s films too.
I remember the original ones with Alistair Sim.

I’ve just uploaded some photos I took when I visited The Point as easyCinema in July 2003. Running from May 2003 to May 2006, this was either a bold entrepreneurial venture or a foolish odyssey, depending on how one views this fascinating footnote to UK film exhibition.

Appalled by what he regarded as a waste of capacity, easyJet founder Stelios Haji-Ioannou was determined to end what he called ‘rip-off cinema’ and make maximum use of the seats available. His answer was to adopt the easyJet model, and offer seats at very low prices in advance, with the price increasing as show time approached. In addition, tickets would have to be booked on-line, saving the expense of a box office. Patrons entered the auditorium via a turnstile, operated from the bar code on their booking confirmation. They were free to bring along their own food and drink – and asked to take away their rubbish, all these measures being aimed at reducing the number of staff on duty.

But no cinema can operate without any staff at all, so a computer terminal was set up in the otherwise rather sparse foyer for patrons who either just turned up, or who were unable to book on-line in advance, and the staff mainly provided assistance with this.

An amusing consequence of the electronic turnstiles was the notices urging patrons to go to the toilet before entering the auditorium – as leaving and re-entry was not permitted for a specified time after entry!

Stelios tub-thumped an advance ticket price of just 20p. Not surprisingly, the major distributors were not at all keen on this, and his failure to obtain first run films signalled the death knell for his bold experiment. In the event, he persevered for three years, quite an achievement in itself.

As for me, yes, I got my 20p movie! I saw “Anger Management”, starring Adam Sandler and Jack Nicholson, on Thursday 10th July 2003, when I took these photographs. As a comparison, price-wise, I was then paying between £4.00 and £5.25, depending on the time of day, at my local Odeon in Southend-on-Sea.