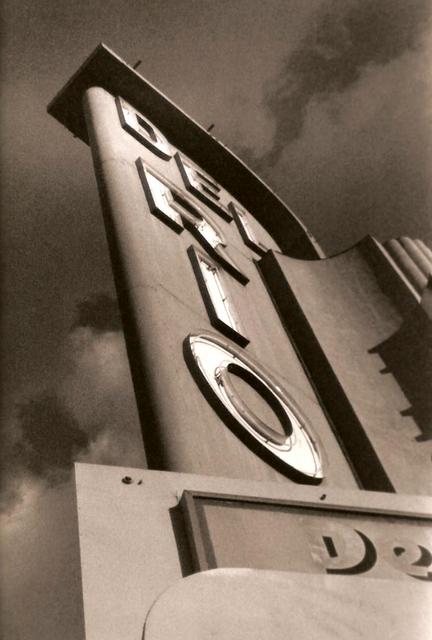 The former Del Rio Theater is located in Riverbank, CA, which is just east of Modesto. It opened on April 30, 1947 with Wallace Beery in “The Mighty McGurk”.

It was converted into a restaurant and also doubled as a bingo hall. The theater has kept its famous sign but is vacant in 2018.

That’s supposed to be O.A. Deichmann.

Here is a 5/25/09 story about possible demolition from the Modesto Bee:
http://tinyurl.com/p33hg4

I thought that was pretty funny too. Even has photos.

I give it a B-. It would have been a B+ but for the claim that Otto Deichmann was “…the foremost theater designer in the west at the time.”

You’re a tough grader. Glad you weren’t at my school.

An April 9, 2012 article in the Modesto Bee says that the City of Riverbank has condemned the Del Rio Theatre building and it is now vacant. The redevelopment agency that was to have overseen the renovation of the house is near default and will probably be shut down. At this point, it seems unlikely that the Del Rio Theatre will be saved.

Despite its condemnation in 2012, a Google street view dated May, 2018 shows Del Rio building still standing, with its vertical sign intact. It did look vacant at that time, and I’ve found no recent information about it on the Internet. The most recent mention is a March 23, 2016 article in The Modesto Bee. At that time the building had been sold to a Modesto businessman who intended to renovate it for use as an event center. The project had obviously not come to fruition by May this year.