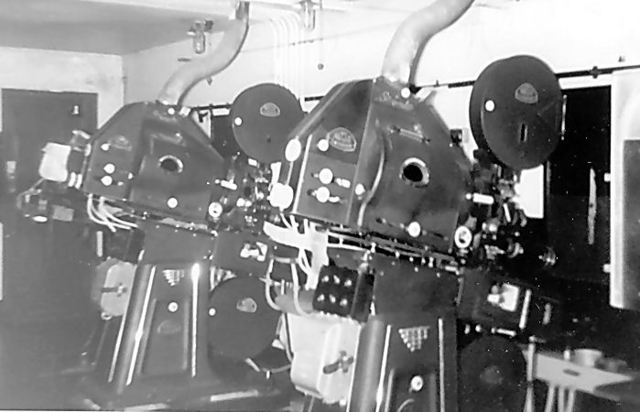 A large building sitting in the centre of Bridgend town, the back of which could clearly be seen from the mainline railway.

It opened as the Embassy Cinema on 30th October 1939 with Lloyd Nolan in “Ambush” and Pat O'Brien in “Off the Record”. It advertised itself as ‘South Wales Newest Super Cinema’. Designed in an Art deco style, the facade was mainly brick, with a row of windows over the entrance, above which were four slender bands in white stone. Inside the auditorium seating was provided in stalls and circle levels. There was a decorative surround to the 33 feet wide rectangular proscenium. The Embassy Cinema was independently operated by the Issacs family. The Embassy Cinema had a large car park and a cycle park for the convenience of its patrons.

By 1980 it had been sold to Wyndham Lewis, on the proviso that cinema use continued. Pop shows began to be staged as well as normal film performances. Bingo was also introduced 3 nights a week.

It was later sold to Nudge Leisure Ltd. and re-named Ritz Cinema. The Ritz was short lived and it closed as a cinema on 9th May 1987 and was refurbished to re-open as the Ritz Bingo Club. Bingo continued until closing in 1999 when a new purpose built bingo hall opened in the town. The building had remained unaltered, apart from the installation of a false ceiling in the foyer and remained a fine example of the work of noted architect David Evelyn Nye.

By the summer of 2001 it was being used for storage by a builders merchants and later that year an application was made to convert the building into a bar, but the local council had earmarked the site for car parking. The Embassy Cinema was demolished in June 2011.

Is the building due to come down soon then?

Another example of a fine cinema that has been left to rot. The Arts Council of Wales together with the local authority could surely remodel this venue to meet the needs and demand of modern day arts and media type community venues?

Are there any interior photographs?

I believe that this might be the last surviving cinema by the distinguished architect David Evelyn Nye.

And the local authority wants to turn it into a car park, what are they thinking!

It was never called The Ritz cinema. It was sold to the group Nudge Leisure who intended to cease film operation and just have bingo (it was run as a dual bingo/cinema operation anyway).

the closure date had been announced as “sometime in the Summer of 1997” but after a furore in the local press they just decided to shut the doors suddenly one Saturday night after the showing of Castaway with Oliver Reed. The giant marquee poster saying “CAST AWAY” was very ominious and appropriate after that.

The theatre never was renowned for good on-screen presentation or management. In fact, it was very poorly run despite being enormously well patronised, right up to the end. They refused to follow the industry standards of changing films on Fridays, and continued with a Sunday to Saturday operation right to the end.

After the modification to bingo, the theatre then looked lovely. But no films anymore, sadly.

This is a not very sharp photo, as it was taken from a moving coach, I only just noticed it as we were passing, if the camera was not already in my hand I’d of missed it.
I’m only including it as the building was still open at the time, albeit only for bingo. I think it was around 1999.
View link

Still standing in April 2011. Council want to demolish for car park still. What a waste.

In August 2011 the demolition contractors had moved in and only a pile of rubble remained. The Car Park will be there before long. Did anyone take last photos of the interior?

Jeffrey Morris this was not the last surviving cinema designed by David Evelyn Nye. The Rex in Berkhamsted and the Odeon in Esher designed by Nye are open and showing movies

My comments that you responded to were related to the David Evelyn Neye cinemas in Wales. There are some fine examples still standing in England of course, as the two you have mentioned.