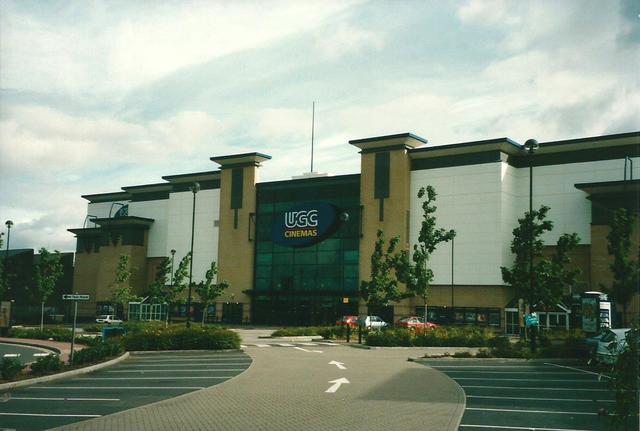 Located on Attercliffe Common at the Valley Centertainment Leisure Park to the north of Attercliffe district. The 20-screen Virgin Megaplex opened on 5th November 1998. The total seating capacity at opening was for 4,915 and two of the twenty screens were Premier class screens. It was purchased by the French entertainment group Union Cinematographique (UGC) in October 1999 and re-named UGC. It was re-branded Cineworld in July 2005.

Seating capacities in the screens range from 691, down to 82.

Since the refurb at the O2, including the balcony the Superscreen there now seats a total of 850. Prior to this it had a capacity of 785 and the seats on the balcony were in a VIP-style setup with small tables between each pair of seats.

Sounds similar to the SUPERSCREEN (originally created as an IMPACT screen whilst owned by Empire cinemas) at Cineworld ‘Empire’ Leicester Square.

Watched a movie there in July 2016 after a mate of mine read about it having a balcony and wanting to check it out. Looking over the balcony at the end of the movie at the seats below they all looked far too close to such a large screen in our opinion.

This auditorium has a Dolby Atmos sound system yet I did not notice any activity whatsoever in the overhead speakers. This has been the case on each occasion that I have watched a movie on an IMPACT (Empire cinemas) or SUPERSCREEN (Cineworld) which each have Dolby Atmos systems installed. Has anyone else found this?

After first reading about Dolby Atmos some years ago I was so hyped to check it out. Outside of London the rollout of Dolby Atmos seemed slow and very limited in the UK. Watched Captain America: Civil War on an Empire cinema IMPACT screen and was hugely disappointed. Did not notice any sound from above. Expected an action-packed movie such as this to give the object-based speakers a thorough workout throughout but sadly not.

Surely, each of the Dolby Atmos equipped auditoriums that I have visited can’t be poorly/incorrectly set up?

Has the SUPERSCREEN at Cineworld O2, Greenwich replaced the old screen 11 which I have noted down as having a screen measuring 22m x 9.2m? That’s a decent size for a non-IMAX screen and worthy of the name SUPERSCREEN imo. Many other SUPERSCREENs are not. Similar to Vue Xtreme they are certainly taller than regular screens but not particularly wide. But the real problem, certainly with Vue Xtreme, is that they are not scope screens meaning if you watch a scope movie then a large portion of the screen becomes unmasked black bars top and bottom. This results in the viewable portion no longer looking particularly big. Vue, Westfield (Shepherds Bush) charge a big premium for Vue Xtreme. Not worth it imo. Would far sooner travel elsewhere to an IMAX screen.

Yes, Superscreen is Cineworld’s name for what Vue called Screen 11. Huge screen as you say however the cavernous auditorium has acoustic issues.

My favourite non-IMAX large format screen is the Superscreen at Cineworld Leicester Square – it’s 0.5m narrower than the O2 one but is taller (1.9 ratio) and has an absolutely superb Dolby Atmos set up.

Perhaps my notes are incorrect? I had noted the two screens you mentioned as measuring:

Both are certainly decent sizes for non-IMAX screens.

Do you find a Dolby Atmos sound system superior to both IMAX 6-channel and 12-channel sound systems?

Shame it’s so far away!

LARGE_screen_format: The loss of side seats progressively towards the front of the auditorium occurs elsewhere, notably at the Cineworld (Empire) Leicester Square since the circle/stadium section of the converted 1960s auditorium is very wide (estimated (from licensing plans) almost 120ft. at the rear, and about 105ft. at the front row of the stadia, the seating width being reduced there to about 75ft. for IMAX 3D.)

From the licensing plans:

Regarding Dolby Atmos vs. IMAX 12 channel, Dolby Atmos is unquestionably technically more sophisticated as an objects-based system which can adapt to different speaker layouts. It also provides a separate LFE channel and a derived rear sub-bass (where needed to meet output capability specs for the rears/overheads,) whereas IMAX has one derived sub-bass channel feeding the screen subwoofers.

However, IMAX auditoria ought to be more consistent in terms of geometry and layout, thus reducing the need for an “adaptive” objects-based system. Furthermore, to date all 12 channel installations have been in larger IMAX venues as the original IMAX with Laser system was intended to replace 15/70 projection in IMAX “Grand Theatre” locations.

Thus the speakers should be identical and relatively similarly placed in all auditoria, and the content is remixed by IMAX for their 12 channel format.

Dolby Atmos allows for a range of venues and equipment, albeit Dolby Atmos has quite specific specifications, including speaker layouts, and every installation requires their approval.

An Atmos installation such as the one at the Cineworld (Empire) Leicester Square will certainly beat 12 channel IMAX but this a top-end installation (e.g. 5 JBL ScreenArray screen speakers with bafflettes and full active digital crossovers) and so its superiority is not only due to the sound format.

IIRC at the time of opening Cineworld (then Virgin) Sheffield had the widest screen in the country; my vague recollection is that it was about 70ft. wide.

Was that screen (70 feet wide) then converted to it’s current IMAX screen or was it a different auditoria altogether?

I believe it was that auditorium (Screen 7) that was converted to IMAX.

I also vaguely recollect that Screen 7 was THX certified on opening, but I’m not confident about this.