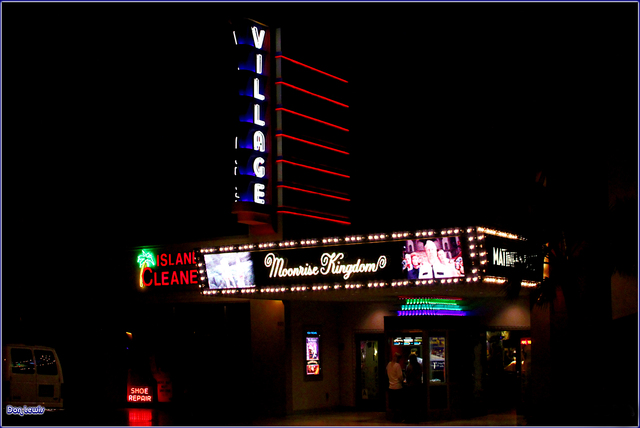 In 2011, work began to convert to a triple screen movie theatre. Interior designs were created by note theatre interior designer, the late Joseph Musil. Murals in the auditoriums create 3D optical illusions of historic places in both Coronado and Balboa Park. It reopened on June 24, 2011 with “Cars 2”.

All I want is to be able to go online and find out what’s playing and at what time, without all the rest of the commentary and marketing. What is the easiest way to do that?

Beautiful theatre. Too bad they had to chop it up. The Los Feliz was ruined by multiplexing.

They really went all out with the murals ala the Majestic (ermm… Bigfoot) Crest. http://www.ecoronado.com/profiles/blogs/step-inside-the-finished

This looks amazing, I think I need to road trip to Coronado soon.

Took a tour of the newly remodeled Village Theatre yesterday. I never saw it prior to the renovation but was quite impressed with its current status. A nice, big vintage concession stand greets you as you walk in and an inviting Art Deco lobby runs the length of the structure, beckoning you toward the the three theaters in the back. The one theater I was able to peek in, maybe the larger one as it appeared to have more than 45 seats, was beautiful: red-velvet, high-back chairs arranged in a semi-circle around the screen, a grand red curtain protecting its secrets; neon, three-dimensional murals depicting Coronado treasures like the Hotel Del adorned each of the side walls. Made me want to run back for a bag of pocorn and stay for the flick. The only visable complaint would be the marquee. It’s digital and while beautiful too, it doesn’t provide showtimes, just graphics on the three films. To see what time something is playing, you have to physically go up to the box office where the times are posted on a small sheet of paper. Kind of frustrating when there’s really no place for a quick stop on busy Orange Ave.
Overall, though, the Village is a theater worthy of your time and something the people of Coronado should be very proud of. (I’ve posted six pics for your viewing pleasure.)

Visited Coronado yesterday and drove by the Village: still no show times listed on the marquee. Couldn’t see any of the ones posted on the box office from the street.

Flix70 great pictures of the Village…Thanks for posting them.

i don’t think there still open, there website says coming in 2011 , that’s gone! lol and there are no features or showtimes for this location

i figured that out by looking at there website