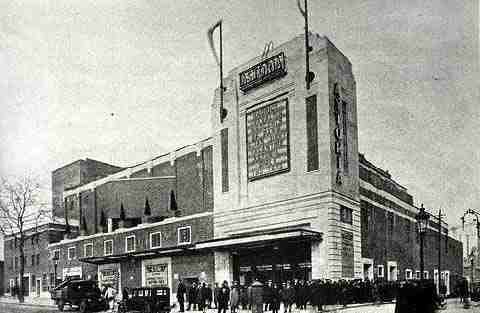 Located in the southeast London district of South Bermondsey, and built on the site of the Palasino Electric Theatre. The Astoria Theatre, was the second of four Astoria Theatres to be built by independent exhibitor A. Segal. It opened on 10th February 1930 with Maurice Chevalier in "Innocents in Paris", a Laurel & Hardy short "Two Tars" and a variety show on stage, and the Astoria Theatre had its own orchestra. The two-console Compton 3Manual/12Ranks organ was opened by organist ‘Roberto’.

The Astoria Theatre was designed, like all the four Astoria theatres in the chain by noted cinema architect Edward Albert Stone. The entrance was faced in white stone and was on the right hand end of the building on the corner of Old Kent Road and Sandgate Street. The auditorium block, in red brick, ran parallel to the Old Kent Road and had the name ‘ASTORIA’ in large letters.

Inside the auditorium, the style of decoration was described as semi-Atmospheric, but in reality, it could be described as Art Deco, with large painted landscape scenes on the splay walls on each side of the proscenium, and was the least ‘Atmospheric’ of the four Astoria theatre’s. The decoration scheme was old gold and silver, broken by jade green and this was retained though the life of the theatre, as it was never re-decorated. Seating was provided in stalls and circle and there was a fully equipped large stage (only a few feet smaller than the Brixton Astoria) and ten dressing rooms. There was a 150 seat cafe located on the balcony level which had silver walls with splashes of brilliant scarlet. In the projection box were 4-Simplex projectors.

With its location on the Old Kent Road, halfway between Elephant & Castle and New Cross Gate at Canal Bridge, and with a good tram service operating with a stop outside the theatre, the Astoria Theatre prospered for many years.

It was taken over by Paramount Pictures Inc. in December 1930 and by the Odeon Theatres Ltd. chain operated by Oscar Deutsch from 27th November 1939. By September 1953 it was known as the Odeon Astoria.

The Astoria Old Kent Road was closed by the Rank Organisation on 29th June 1968 with "The Further Perils of Laurel & Hardy" and Shirley MacLaine in "Woman Times Seven". The building was left empty and delapidated for ten years.

In May 1978 it was converted into ‘The Mad Dog Bowl’, Europe’s first indoor skate park, which catered for 250 skaters. The rear of the circle was converted into squash courts with the stepped floor leveled. After the skateboard craze ended, the building became the Astoria Sports Centre which retained the squash courts and added a gymnasium and sauna in the former stalls and restaurant areas. This proved to be not successful and the building was closed up again. After several years, it was demolished in October/November of 1984. A Magnet DIY hardware store was built on the site.

The three other Astoria Theatre’s still survive; Brixton is a concert venue known as the O2 Academy Brixton, Streatham is the multiscreen Odeon Streatham and Finsbury Park is a church.

A set of 11 vintage photographs of the Astoria Old Kent Road, from opening to demolition:
View link

A vintage photograph of the Astoria Old Kent Road in October 1949, playing the Odeon release:
View link
Photographed in the mid-1950’s:
View link

heres some scans from an 80 yr old astorian magazine