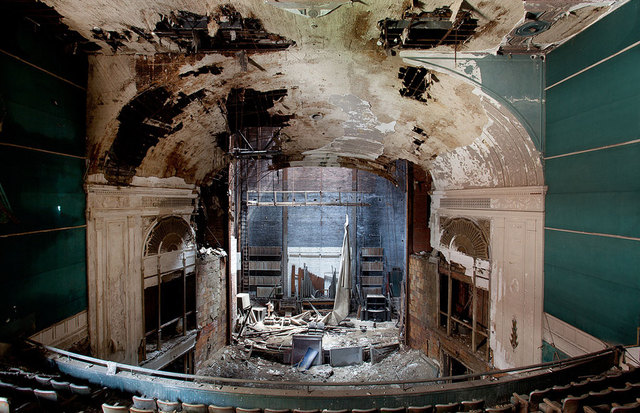 Opened as the Liberty Theatre in February 1918, this small, yet elegant building was clad in white terra cotta, and ornamented with swags and fluted pilasters. It was designed by architect C. Howard Crane, with Stanley & Scheibel as associate architects. It was equipped with a Hilgreen-Lane 2 Manual pipe organ (which remained in the building to the end!).

It became known as the Paramount Theatre on July 19, 1929 with the 4 Marx Brothers in “The Cocoanuts”. Its mezzanine was given an Art Deco makeover in the 1930’s.

Closed in 1976 with Bill Crosby in “Let’s Do It Again”, the marquee has since been removed, leaving only a metal framework. An ill fated renovation was attempted in the early-1980’s but abandoned due to cost constraints.

The interior plasterwork was particularly beautiful. The building contains two empty storefronts which have been gutted although the lobby and auditorium were more or less intact. It was demolished in March 2013.

First you double posted your message as stupid as it is. No I’m not jealous in the least. Most of the photos and messages about Youngstown theaters came from me, and don’t you forget it.

This building was a dangerous eyesore that was one of the most photographed buildings in downtown Youngstown, and every time the national news media came to town to cover a story, they used it as a backdrop.

Our city is making a major comeback that people didn’t think would ever happen, and this theater was an eyesore. It needed to go five years ago.

That’s nice that all of the Youngstown theater stuff comes from you, but you still live in Youngstown, and while your city may be getting better, it still sucks.

Maybe the news will start using the Uptown Theatre as a backdrop now.

I have read most of the comments and it sounds like what has happened with this theatre and the town of Youngstown in general has been very sad. I would hope that, with what money and skills they have, the people of Youngstown would come together and get the town back on track to a great place instead of being doom and gloom and all depressed (I’m ignorant and generalizing here based upon stuff on the internet; I’ve never actually been to Youngstown).

But I do understand how hard it is to raise a huge amount of money to restore an old theatre, and also, once the theatre is restored, to open it and run it, whether as a performing arts venue, or art-house movie theatre, or what have you.

Were the folks who really cared about this place allowed to go in (with safety officials present for protection, of course) and pull out the remaining fixtures in the theatre (seats, lighting, props, etc. etc.) before the shell was demolished? Or did all remaining items go down with the theatre building?

Most pertinently to my own interests, did anybody make any attempt to remove what remained of the original Hilgreen-Lane pipe organ before the theatre was demolished? I’m sorry I first learned about the existence of this theatre and organ only one month ago… had I known of it two years ago (or even one year ago), I just might have tried to get a plane to Youngstown, get permission to remove the organ, taken it out and put it in a big 15' or 20' truck to take home. (If the organ still exists and is still available, let me know!)

Although definitely in bad shape judging from the photos (with many pipes missing, probably liberated by the “midnight organ supply” whom I hope are traceable local organbuilders/enthusiasts, since only a complete moron would try to loot old metal organ pipes which are a mixture of lead and tin and thus worth far more for musical and intrinsic purposes than recycling value), the organ does/did NOT appear to be unrestorable to me based upon the photos… my friend Robert Loeffler in Florida (Robert’s Musical Restorations) as well as other fine American restorers, have restored pianos and automatic musical instruments (including some pipe organs) in FAR WORSE shape than this, with many more parts missing.

The question is how much do you want to pay, and how much work are you willing to do in the restoration. (And somebody who really cares about the instruments, won’t give a damn about the additional cost of a good, proper restoration by a legitimate restorer, beyond the value added to the instrument, since they are in it for the music, not the money).

Also, a dedicated and determined amateur, with not a lot of money, can still restore almost anything provided that they CARE about the original instrument, research it thoroughly, obtain the correct restoration materials and use good techniques to avoid ruining the originality of the instrument.

This is really sad, a (previously-unknown?) remaining original-installation organ in a theatre, with the theatre demolished this year, in 2013!

I do hope some attempt was made to save this organ.

Unfortunately no attempt was made to remove the consul or any of the pipes before demolition began so far as I know. As to the pipes themselves most were long gone before demolition even began. The owner of the theater at the time, Rick Blackwell, showed me the organ in the 1980’s when he was trying to restore the theater, and what you see in the photo was just about all that was left then.

The pipes that remained in the photo above were removed about a year or so before demolition. I don’t know if the owner had them removed or if they were taken by scrappers.

To JamesD … actually I did see a lot of movies there over the years, and when a group was trying to restore it in the 1980’s I helped, so I was very familiar with the Paramount. I also was well aware of building codes and knew that it would take millions to restore the theater.

As a historical sidebar, Youngstown’s very first theater was located in a building that stood where the Liberty/Paramount was located and seated 1000 people, but since no movies were ever shown there since we are refering to the 1850’s it doesn’t qualify for listing here, but the Mahoning Valley Historical Society should have information on this theater.