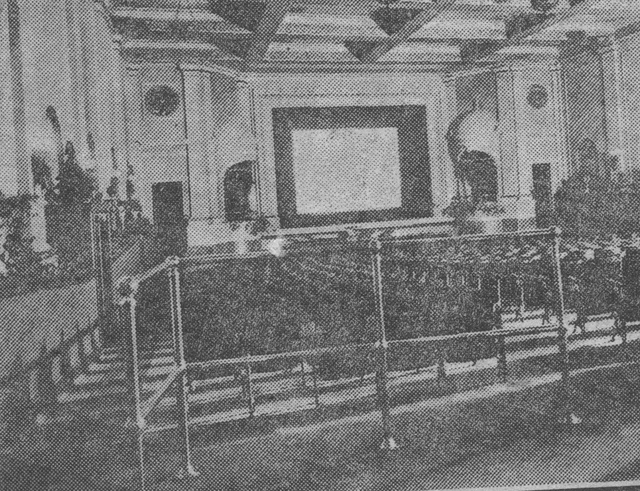 Here are a number of Vindicator articles about the Dome.

And at this link are pictures

This might be hard to do, but can anyone come up with an exact address? The theater entrance was not right on the corner and even if it was, which corner would it be?

The second Vindicator is sorta interesting cause it has stuff about the RMS TITANIC which had SUNK JUST SIX DAYS BEFORE!

Architect Herman F. Kling was the subject of one of the thumbnail biographies in volume 2 of Joseph Green Butler’s 1921 work “History of Youngstown and the Mahoning Valley.” It doesn’t mention the Dome, but does say that Kling & Zenk designed the Grand Opera House at Sharon, Pennsylvania.

There was an article about opening of the Dome in a 1912 issue of trade journal The Moving Picture World:[quote]“The Dome Theater… is owned by Messrs. Renner & Deibel, men who can see big returns from a first-class picture house. The place is managed by C. W. Deibel, who opened it on the evening of Saturday, December 21, 1912. From its opening date to this day, the business of this expensive picture house has been more than the proprietors anticipated.

“The auditorium, which provides opera chairs for 800 persons, is finished along lines that combine simplicity with a magnitude of size and space which are seldom to be found in the average picture theater. From any seat on the sloping floors, one can obtain a full view of the screen and stage.

“Patrons are enabled to enter and leave any part of the auditorium at any time without inconveniencing in the least degree those seated about them. The exits on the Hazel Street side are large double doors that open directly to the street; the west side exits, which are of the same commodious character, lead to a fireproof foyer which furnishes an unobstructed passage to Federal Street, parallel with the main entrance. There is a handsome marquee extending for some distance over the sidewalk of the Federal Street entrance.

“Brilliant with electric lights, it heralds a welcome to the palatial foyer and lobby. The sides of the lobby are covered with polished marble, which half way to the top meets a series of mural panels that shade in quiet tints with the ceiling which is studded with inverted lights casting their radiance towards the ceiling. The floor of the lobby is done in mosaic style.

“The operating room is constructed of fireproof material and has three operating machines in constant use. The picture is projected upon a mirror screen which the manager says is the ‘largest in the State. The ventilation of the theater has been made the subject of careful study by the proprietors which resulted in a system almost incomparable.

“Music is furnished by a nine-piece orchestra.”[/quote]The Moving Picture World had another item about the Dome in its issue of August 7, 1915:

“The Dome theater, at Youngstown, which has been undergoing repairs for some time, including the installation of a roomy balcony, which will add largely to its seating capacity, was reopened last Thursday with a special program to commemorate the occasion. A large orchestra was among the special features provided.”

The September 3, 1936 entry in the dairy of Youngstown attorney Benjamin Roth, parts of which were published last year (Google Books preview) noted that new stores were opening up all over town, and included the line: “Even the old Dome Theater is being converted into a store room.”

The Dome actually was the third building west of Hazel and West Federal, but it also had an entrance on North Hazel according to the illistration published in the Vindicator.

As to more pictures than those I posted on my Webshots site, I couldn’t locate more.

As an aside, Mr. Savage who was Dome Manager during the Warner era was transfered to the new Warner Theater, a position he held til his death.

The December 22, 1912 Youngstown Vindicator ran a 2 page ad about the opening of the Dome Theatre and clearly stated in the ad that the architect for the Dome was the firm of Louis Boucherle & Son. They were located in the Stambaugh Building in Youngstown.

Deibell named his first theater, a nickelodeon, a small place seating either 95 or 186 people (depending on source), the Dome. It was known to be operating as early as May 1907. Deibell was said to have approached Jack Warner as a young boy and asked him to do the song slides in between shows which he did for a few months. Jack also sang at the Grand Opera House on Sunday nights during this time when the Dome was closed. Deibel had four succesive theaters each named Dome. In 1926 the “Dome” was owned by David M. Robins. It was one of the first three movie houses in the country to be wired for sound in 1928.