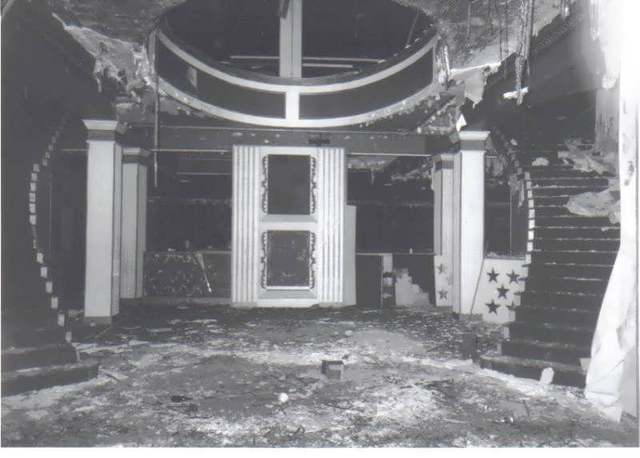 The State Theatre opened in January 1928 with John Gilbert & Greta Garbo in “Flesh and the Devil”. Designed by architect Charles W. Bates, with engineer William M. Cook, it had a narrow entrance and lobby which fronted W. Federal Street, Youngstown’s principal business street at the time. Over the entrance is a large arched opening, framed by Roman columns and originally topped with a palladian window.

The auditorium was reached from the lobby over an enclosed bridge spanning a rear alley. It was equipped with a Kimball theatre organ.

Operated as a movie theatre until closing in 1970. It was then used as a nightclub known as the Agora. Plans have been discussed to renovate the lobby as a museum for Idora Park, a defunct Youngstown Amusement Park.

There has also been interest by a local playhouse to obtain and renovate the theatre, however most of the State Theatre’s interior features have already been obliterated and the auditorium may be beyond feasible repair.

Situated one block east of the renovated Powers Auditorium, formerly the Warner Theatre, the State Theatre’s renovation would have been a definite plus to downtown revitalization. Sadly, the State Theatre was demolished in late-November 2008, only the front wall was saved.

Just doing some light research through the Vindy archives and it seems like the theater was used in some form until the late 80s. By 1986 it was called the Star Palace and looked to be catering less to hard rock ‘n’ roll acts that made the venue popular in the Tomorrow Club and Agora era. There are concert dates in the paper in 1987. I would assume it closed shortly thereafter.

The Agora era ended on July 23, 1982 when it abruptly closed. Bankruptcy followed. Lots of reports of fighting/vandalism associated with the facility in 1982 helped lead to its demise. It was reopened as State Theater and Civic Center in late Sept./early Oct. 1983.

Jack Gerchok, who owned and operated the Tomorrow Club and Agora, died in Jan. 1991 at the age of 52.

As far as films are concerned, Sept. 1970 seems to be the last of the ads in the Vindicator. The last film advertised is “Tropic of Cancer”.

During the first two years of it’s life 1928-29 the State had a movie and vaudeville program, but in 1930 no furthe live vaudeville was presented. The plan was one feature film followed by five vaudeville acts.

Emil Renner (a member of the Renner Brewery family) was one of the original owners of the State. He also oned the Princess Theatre; Realto Theatre; Uptown Theatre; Mahoning Theater; Cameo Theater; and Victor Theater, all of Youngstown.

The Cameo Theater was built at the same time that the State was built and was located between Chestnut and Fifth Avenue in downtown Youngstown and had a seating capacity of 800. It lasted for about 20 years before it closed, and the building was later demolished.

There is very little information about the Cameo other than what I mentioned, so I can’t give it its own page unless someone can provide more information. I do have a photo of the outside of the Cameo.

This is a longshot, but … As a child in 1952 I visited an adult sibling in Youngstown and saw movies with her that were playing concurrently that weekend. Can anyone tell me which Downtown Youngstown theater played “Where’s Charley?” and which played “Don’t Bother to Knock” (those theaters were practically side by side) and which played the reissued double bill of “Dodge City” and “Virginia City”? That theater was less impressive than the other two and was directly across the street from “Where’s Charley?” as I recall. Many thanks for any help.

The State Theatre held a 3 Manual 12 Rank Kimball Theatre Pipe Organ, installed in 1928. It was removed, rebuilt, enlarged and re-installed in a Kingston, Ontario church.

When the State opened, it had a sister theater that was located between Chestnut Street and Fifth Avenue that was a small theater that ran westerns and other “B” pictures ans serials, and was named the Cameo Theater. It only lasted about 10 years before it was torn down.

Ed- I have no idea what the State looked like in 1952 since I wasn’t born yet, lol. But I’m guessing there must have been a substantial remodeling shortly thereafter since the State went on to become the premier roadshow house in downtown Youngstown (“West Side Story,” “Around the World in 80 Days,” “Dr. Zhivago,” “Cleopatra,” a year run of “The Sound of Music,” etc., etc.).

Patsy- Just saw your (long ago) post. Could you be thinking of the Southern Park Mall Cinema? It opened in April 1970 as a single-screen theater (w/ “MAS*H”), and, sadly, became a twin in mid-1977.