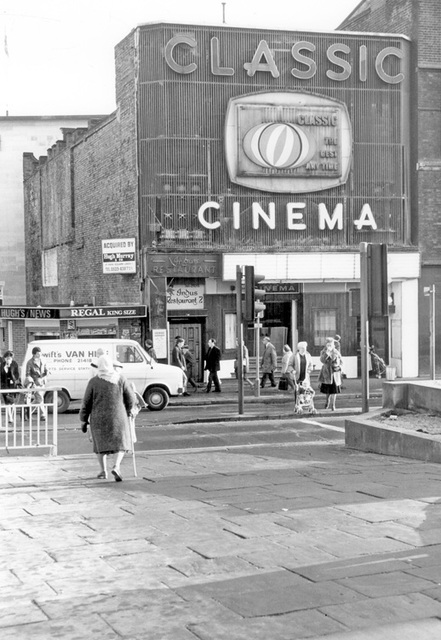 Opened as the Electra Palace on 10th February 1911. It was designed by J.H. Hickton & Harry E. Farmer of Birmingham & Walsall. Constructed by George Longden & Son Ltd. (who built several Sheffield cinemas), the proprietors being Sheffield & District Cinematograph Theatres Ltd. It was built on the former ‘Wonderland’ site which was a wooden fairground type structure where ‘animated pictures’ were part of the entertainments on offer.

The exterior of the new cinema was of 15th Century Arabian architecture in white glazed terracotta. Seating was for 670 and an unusual feature of the cinema was an asymmetrical curved balcony. The auditorium walls were panelled and coloured in ivory and white and the walls and ceiling were rich in fibrous plasterwork with the balcony front embellished with finely modelled cupids. A platform in front of the screen displayed mosses and roses. At balcony level there was a tea lounge, whilst in the basement there was a restaurant. The Electra Palace was the first Sheffield cinema to show continuous performances and these were advertised as being from 3pm to 10.30pm. The first sound film there, “Movietone Follies of 1929” was shown on Monday 6th January 1930.

The cinema closed for alterations on 29th July 1945 and re-opened on September 9th 1945 under the new ownership of Capital & Provincial News Theatres, its name now being the News Theatre. On 15th January 1959 it changed its name to The Cartoon Cinema and continuous cartoons and news films were shown.

On 15th January 1962 the cinema was purchased by the Classic Cinemas chain who carried out an extensive face lift to the cinema. The ornate exterior was covered in metal cladding and all the decorative interior plasterwork was removed with seating reduced to 484. Most of the work was done through the nights and the cinema did not close. The name was changed once again to Classic Cinema and it became well known for its re-runs of ‘classic’ films. In April 1982 the Cannon Group of Cinemas purchased the Classic chain and on 24th November 1982 Cannon closed the cinema with Sylvester Stallone in “Rocky 3”.

Efforts were made to have the building listed for architectural and historical interest but the Department of Environment refused to list it. Following a serious fire on Wednesday 15th February 1984, the remains of the cinema were demolished and a retail store was built on the site.

The Classic Cinema can be seen in the middle distance in this photograph taken possibly in the mid-1960’s:
http://www.flickr.com/photos/sheffdave/1917840151/