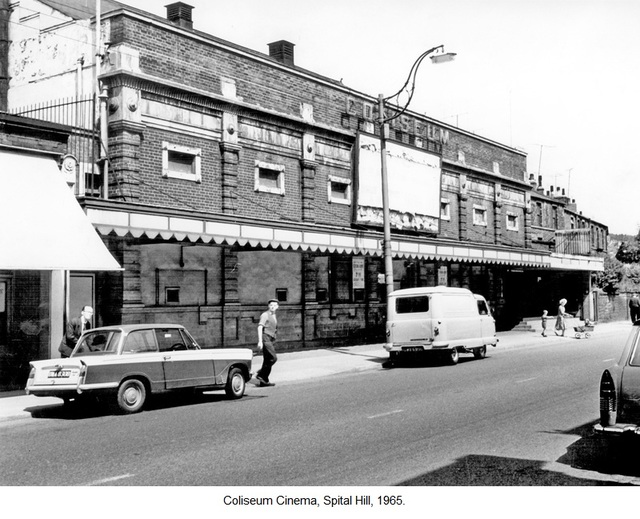 The Coliseum Cinema, Spital Hill just outside Sheffield City Centre, was opened on 24th April 1913 for a company headed by a local furniture store owner, W.T. Gent. The Gent family were to be associated with the cinema throughout its life.

The cinema had a 110 foot frontage to the street and was constructed of brick on a steel frame. The facade was finished in cement with a five foot green faience and the main entrance was flanked by fluted pilasters. A ten foot wide alley was constructed down the side of the cinema for the entrance to the pit stalls which had a patent glass roof to shelter the queues. A cast iron canopy with stained glass was erected over the main front entrance. The auditorium, which was at right angles to the entrance seated 1,400 and was described as lavish. Plaster decorations on the balcony front were in the form of medallions surmounted on cherubs, linked together with festoons. Painted scenes of various countries on panels decorated the side walls. The stage had a depth of 11 feet with a 20 feet wide opening. The stage was enlarged in 1929 during the cine-variety period. An organ was installed in 1921 built by the firm of Peter Conacher of Huddersfield. It was in two parts and was placed either side of the screen.

A new proscenium was built in 1935 when the auditorium was redecorated in a ‘futuristic’ style and new wider spaced seating, reducing the capacity to 1,100. Damaged was sustained to the cinema on the first night of the blitz, which five years later was found to worse than originally thought. The ceiling spars were found to be coming away from the main joist and the cinema had to close for two weeks for these repairs to be carried out.

A large panoramic screen was installed in 1954, although the first ‘scope’ film was not shown until November 1955. The cinema was never equipped with magnetic sound but had the more basic ‘Perspecta’ stereophonic sound using two optical tracks.

The Coliseum Cinema closed on Saturday 2nd November 1963 with the Walt Disney double bill programme “Horse Without A Head” and Brian Keith in “Savage Sam”. There was talk of it being converted into a theatre for use by several of Sheffield’s many Amateur Operatic Societies but this plan never got further than the drawing board and the cinema was subsequently demolished in 1965 and a petrol station was built on the site. This too has now closed.