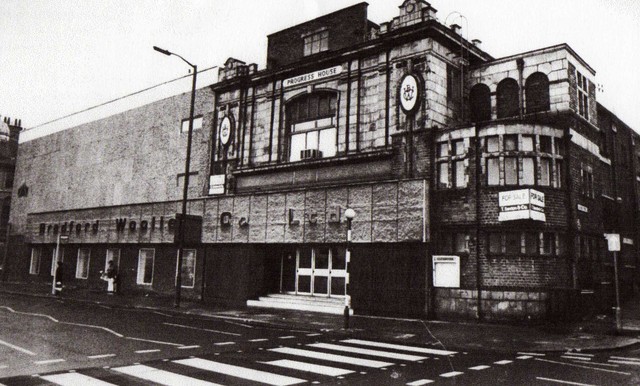 The Don Picture Palace opened on Monday 18th November 1912 with the films “Captain Starlight” and “Monarchs Of The Prairie”. The architect was Henry Patterson and it was situated in what was then one of the main entertainment areas of Sheffield with the old Grand Theatre of Varieties being close by.

Seating was for 950 on one level, although in 1914 the roof was raised and a balcony was added providing a further 350 seats. The façade of the cinema was faced with brick and orange tinted terracotta in a French Renaissance style and above the central entrance a fascia in blue and gold carried the words ‘The Don’. A novel illuminated sign was a clown above one side of the entrance who appeared to throw a ball of light across to another clown on the opposite side who in turn threw it on to a signboard where each ball lit a letter of the words ‘Don Picture Palace.

The auditorium had a segmental ceiling relieved by plaster cornices, ribs and panels. Plasterwork and decoration was by J.L. Harrison of Sheffield. The proscenium was 30 feet wide. In 1915 a café and grill room was opened. The Don went over to sound in April 1930 when the British Acoustic system was installed. This was replaced by the Cinephone system in 1934 but in 1944, following a fire in the projection box, the BA system was reinstalled.

CinemaScope was installed in 1956. In 1957 the Don Cinema closed for redecoration and an unusually large screen was fitted reopening with “Oklahoma!” starring Gordon MacRae. However, the following year on 1st March 1958 the Don Cinema closed with the final films “The Oklahoma Man” with Joel McCrea and Barbara Hale and Bill Elliot in “Footsteps In The Night”. The Don Cinema then became a furniture showroom and an extension was built to the left hand side of the building. It is currently a storage warehouse.

According to the Star dated 19th October, 1980 the furniture company was haunted by the ghost of the former projectionist who started at the cinema when it opened. Both a former manager and junior projectionist claim the phantom must be Mr Potter, who devoted his life to the cinema.