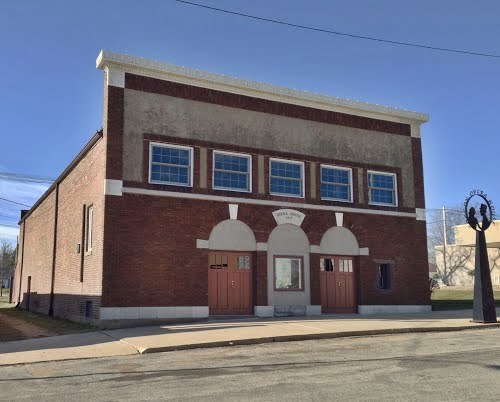 Address: 209 E. Main Street, Coggon, IA 52218. Built in 1915, the Coggon Opera House continues to be a gathering place for community events. For many years it was the Comet movie theater. It was refurbished and reopened in 1993. Known for its great acoustics, it has hosted many productions, including plays produced annually by the Opera House Community Theater Group. The building is owned and managed by the Coggon Old Opera House Community Arts Council. When movie theaters became popular, a large screen and projection booth were added. A contest was held to name the movie house. The winning name “Comet” was chosen and a large sign erected over the marquee and ticket booth. In the 1940’s Bank Nights brought large crowds with the hope of winning a cash prize. Dishes were also awarded at times. Tickets cost 22¢ on Saturday and 28¢ on Sunday, Tuesday and Wednesday. The 28¢ included a special World War II tax. No movies were shown on Friday nights after football was added to the high school schedule. The Coggon Improvement Company was formed in 1944 and became the building’s owner. They leased it to various movie theater operators through the years. These operators were: Joe C. Smay – 1944-47; Vic Williams – 1947-49; Fay & Mabel French – 1949-74; Russell Schmidt and Dennis Pflughaupt families – 1974-80; Ron & Linda LaPole – 1981-82. When television came, attendance declined. The Comet Theater was closed in 1982. Neglect and vandals took their toll on the structure

The July 4, 1914, issue of Construction News had this notice:

W. J. Brown is the William Jay Brown who designed the Strand (later the World) Theatre in Cedar Rapids.