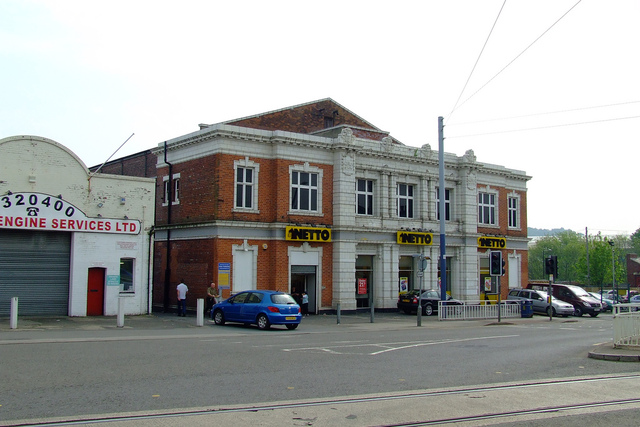 The Hillsborough Park Cinema is located in the Hillsborough district to the north-west of Sheffield. It opened on Thursday 10th February 1921 with “The Rajah’s Amulet” & William Desmond in “Bare Fisted Gallagher”. It was built on filled-in land and although nothing serious has happened to the building, over the years cracks have appeared in the back wall which have had to be repointed from time to time. A handsome building built in red brick with white faience façade mainly above and around the entrance and front windows and parapet. Seating for 1,300 (900 in the stalls and 400 in the circle) was in rose velvet with the auditorium walls painted in rose and green with light fittings to match. A café was situated on the first floor at balcony level but was used in the evenings for regular whist drives and card games. In 1923, the café was converted into a ballroom, but within a year the card players were back with dances only held occasionally.

Sound arrived in April 1930 and the cinema was entirely redecorated in 1931. Matinees were held on Mondays and Thursdays but these were stopped in 1952. Saturday Children’s matinees were introduced in August 1955 but ended after two years. Sunday opening was given a trial in 1956 but only lasted a few weeks.

The Star Cinema Group took over the Hillsborough Park Cinema in February 1960 and closed it briefly for complete modernisation, reinstating Sunday opening and the Saturday Star Juniors Club.

The Hillsborough Park Cinema closed on Sunday 29th October 1967 with the double ‘X’ certificate programme Donald Pleasance in “Dr Crippen” & Dick Miller in “Buckets Of Blood”. A week later it reopened as a Star Bingo Club. This ran successfully for several years, then the building became a supermarket, which was a Netto Supermarket in 2008, and is now an Asda Supermarket.

Prior to the building being Netto it was Willis Discount (not sure when it opened but it was there in 1986 up until about 1990/91 I think when it closed but under the name Willis Foodstores. I believe it was a family business and they had another shop in either Walkley or Crookes. I always remember the song in 1986 when I was in the store which went like this:

“Willis Discount are doing it right; quality foods at a discount price”.

Netto closed it’s doors I think in June 2011 and reopened as an Asda Supermarket in August 2011.

well remembered carobbo78 i used to be the manager of willis right up to it shutting god it was a spooky place upstairs we often had encounters with the ghost that haunted it and he would often let us know he was there. upstairs we had our canteen and toilets and every morning and evening we had to go down a passage pass the balcony entrace to open a fire door at the bottom of some fire escape stairs really scary you always felt like someone was watching you but i was there for 5 years and could write a book on the experiences we had with alfrid the ghost a man dressed in a black suit wearing a large brimed black hat its been over 20 years since i worked there and im just writing to asda head office to see if i could get to go and have a look round upstairs again the asda management dont like going upstairs only go if they have to they say theres an uneeasy feeling and its not nice maybe its not as they took out the big set of stairs that were in the middle of the shop that went upstairs bet its rather cut off up there now still want to go and see what its like see if its changed or the balcony has rotted away that was still there when i worked there but all the seats had gone