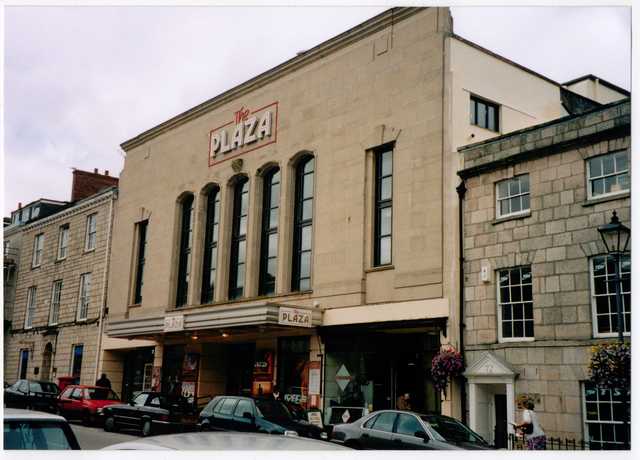 The Plaza Cinema opened in February 1936 with a seating capacity of 1,176 in stalls and circle levels. It was designed in an Art Deco style by noted Bristol based cinema architect William Henry Watkins.

Built for an independent operator, it was later taken over by the Jackson Withers circuit. The proscenium was 34 feet wide, although the stage was small, being only 8 feet deep. There were three dressing rooms. There was a cafe and a ballroom in the building.

Taken over by the Rank Organisation in 1976-77, they applied for a Bingo Licence, but it was refused. Sold to an independent operator, it was twinned, re-opening on 29th May 1980 with 1,114 seats in the former stalls and 175 in the former circle. A third screen seating 160 opened in June 1988.

I worked at this cinema for a summer season, alongside the Camelot in Newquay, for Mr Norman Whale who operated both at the time. Sadly the electrics in the Plaza were a little suspect, which caused the safety certificate to be refused… by that time, Mr Whale had lost the Camelot, and so decided to give it all up. It is good that WTW Cornish Cinemas took the Plaza over… always a pleasure to work in, the main screen, Plaza 1, still used the old projectors and carbon arc lighting, from the original projection room.

Plaza 2 was in the former circle foyer, projection room squeezed under the circle void… Plaza 3 was in two-thirds of the rear stalls… the other third unused, just used as a walkway to gain access to the front stalls when needed.

If you sat in the circle in Plaza 1, you still had the same look and feel of how it all was when it opened.. pure bliss!

Another thought.. above the Circle foyer (Plaza 2) was unused space, the former cafe. You could see out of the top of the three long windows onto Lemon Street from there, plus there was still a pond in the roof (which leaked!) from when it was opened… devoid of fish I hasten to add! It must have looked beautiful at night lit up… Mr Whale had plans to build Plaza 4 up there, but it never came to pass…