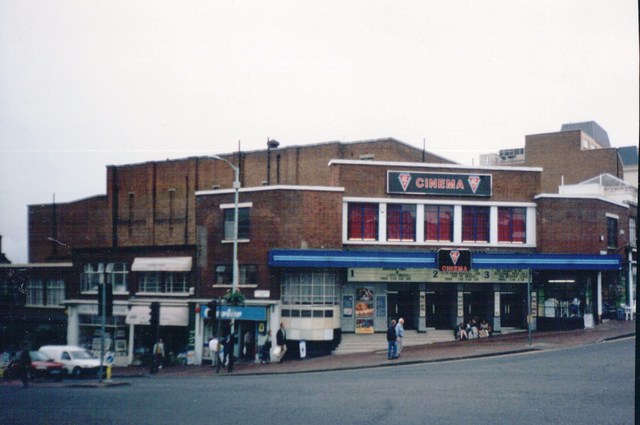 The Ritz Cinema opened on 3rd December 1934 with Gracie Fields in “Sing As We Go” and Matheson Lang in “The Defender”, with film actress Margaret Bannerman, a star of the “The Defender” appearing in person. It was the first cinema to be specifically built for the Union Cinema circuit, and even with its many name changes, a faded ‘Ritz’ sign could be seen at the rear of the building.

A 50 feet tall glass tower originally stood over the entrance but this was removed in the 1950’s. The layout of the cinema was rather extraordinary in that the foyer was offset at a 45 degree angle to the main auditorium block and almost separate to it. A parade of shops were attached to the foyer block but again these were not attached to the main building. A small cafe and a ballroom were also included in the design.

The Ritz Cinema was equipped with a 3Manual/6Rank Compton organ, with an illuminated console on a lift, which was opened by Alex Taylor. Sunday concerts were held on the stage in the early years, with Elsie & Doris Waters ‘Gert & Daisy’ topping the bill on 23rd December 1934

Taken over by the Essoldo chain in February 1954, on 18th July 1970 it reopened after they had twinned the cinema, using the stalls as the main number one cinema seating 450 with the original screen, and the circle blocked off to make screen 2 which seated 366. The organ was removed at this time.

Classic Cinemas Ltd. acquired the cinema on 2nd April 1972 and they added a 125 seat third screen in the former cafe area, using periscope projection. The Cannon Group took over the Classic Cinemas chain in 1982 and it was re-named Cannon in 1985. Then it was known as the MGM from 1993, briefly became the Virgin, then in 1996 with the management buyout of non multiplex cinemas - the ABC.

By 2000, even though the ABC was still commercially viable, as the Odeon & ABC chains had merged, the ABC became obsolete as Odeon had by this time opened an out of town multiplex and the final films were shown on Sunday 29th October 2000.

In 2008, the empty building sits empty and unused, awaiting its fate. In October 2009, the building was being prepared for demolition and was demolished in late-summer 2014. In May 2019,it remains a vacant site awaiting redevelopment

A vintage photograph from the 1970’s as the Classic:
http://www.mawgrim.co.uk/projection/twellsc.jpg

I went to School in England for 2 years. I had friends in Royal Tunbridge Wells and we would go to the Classic Theater together after grabbing some Lunch at The Pantilles nearby. The Classic was always packed lots of people having a good time. That is a bummer that it’s fate was the wrecking ball.

Ive seen the interior of this on various urban exploration sites and its a total wreck, pity.

It was in a sad state, but still standing, when I went past it yesterday. However, it would appear the council are forcing the owners to demolish it:

Demolition of a derelict town centre cinema in Kent, branded as a “grot spot” is due to start this week.

The former ABC cinema in the centre of Tunbridge Wells has been derelict for nearly 14 years despite a number of demolition and redevelopment plans.

Work was due to start on Monday but work to make safe the electricity and gas supplies has delayed demolition.

A former dental surgery on the site will pulled down first, with the project due to take 12 weeks.

Liberal Democrat councillor Ben Chapelard, who has campaigned for the redevelopment of the site, has previously called it the town’s “number one grot spot”.

In February, the Conservative-led borough council issued a demolition notice on the owners.