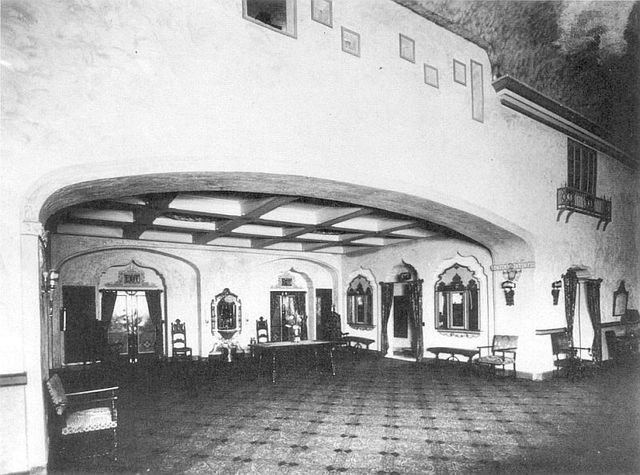 The Commodore Theatre opened by the Stanley-Warner Theaters chain on September 22, 1928 with Lon Chaney in “Laugh, Clown, Laugh”. Located on the corner of 43rd Street and Walnut Street in West Philadelphia. Designed by the architectural firm Ballinger Company, in association with Hoffman & Henon in a Spanish Revival/Moorish style. The auditorium block runs parallel to Walnut Street. The Commodore Theatre was equipped with a 3 manual 10 rank Wurlitzer theatre organ.

Closed as a movie theatre on May 13, 1956 with Marlon Brando in “Guys and Dolls”. It was given a new lease of life in the early-1960’s when it became a live theatre, changing its name to 43rd Street Theatre. Theatre use failed after a couple of seasons and the building lay empty and unused for a while.

It was converted into church use, and since 1973 has served as a mosque.

I remember that building very well from my college days. I used to live at 44th and Walnut, so I would walk by that old barn every day. The marquee on the roof was kind of a giveaway. Funny to see pictures of that neighborhood after 25 years.

3 June 1950 Box Office stated that Gloria Swanson would be hostess at a “Sunset Boulevard” screening at Commodore Theatre on June 19.

It looks like the theater was a church in 1964, from this Temple U. photo:
http://tinyurl.com/yhft7ru

Here is another 1964 photo:
http://tinyurl.com/yfjurao

Here is another Temple photo:
http://tinyurl.com/yfr85dc

Stanley Warner closed the Commodore Theatre on May 13, 1956 with “Guys and Dolls.” The long-running Commodore and Ogontz were retrofitted as live theaters. The Commodore became the Forty-Third Street Theatre beginning on January 12, 1959 with “The Potting Shed” by Graham Greene. It appears to have folded after just two plays.