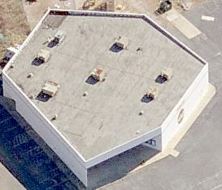 Opened on November 21, 1979, the Capri Triple Theatres became High Point’s first ever triplex cinema under Martin Theatres. Martin Theatres basically owned and operated two other movie houses in the city including the Martin Theatre and the Martin Twin Theatres. The Capri Triple Theatres were an ultra modern design theatre inside and out, and for the first time it had one of its three auditorium’s equipped with the latest Dolby Stereo Sound System. Its largest auditorium seated 600, while the other two auditoriums seated 515 and 550. The opening attractions for the November 21, 1979 opening were the re-release of “Fiddler on the Roof” in Screen 1, Screen 2 played Don Knotts in “The Prize Fighter” and Screen 3 played Francis Ford Coppula’s “Apocalypse Now”. A lot of great blockbuster movies played at the Capri Triple Theatres until it closed in 1995.

Correction: The Capri Triple Theatres opened to the public on November 21,1979 as High Point’s first-ever triplex cinema. This theatre did not open in 1976,but it opened in 1979. I have the ads from its grand opening that were in the 11/21/1979 edition of the High Point Enterprise. The information concerning this cinema will be updated. It closed around 1999 or 2000.

A lot of blockbusters played at the Capri Triple. From “Raiders of the Lost Ark” to “E.T.”,and even “Back to the Future”. The original “Batman” played here first-run as well.

The Capri Triple Theatre upon it’s opening was complete with a Dobly Stereo Sound System installed in it’s largest auditorium(Screen 1) for it’s November 21, 1979 premiere showing of “Fiddler on the Roof”,which was re-released back in theatres.