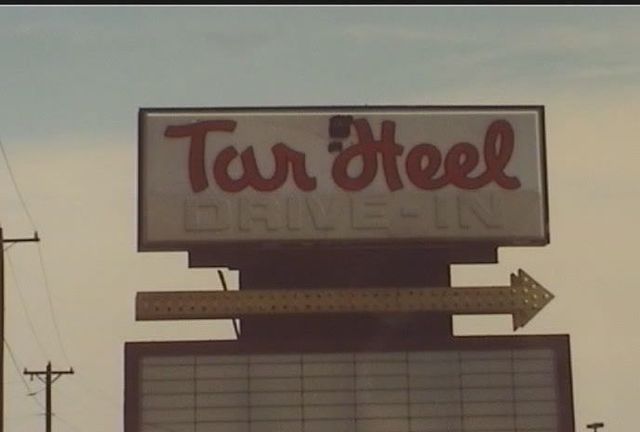 Located in the Archdale district to the south of High Point. The Tar Heel Drive-In opened in 1955 by Max Reinhardt Exhibitors Services. The car capacity was listed at 300. It started showing adult movies in the late-1970’s. This drive-in was later operated by Piedmont Theatres.

STAR WARS played here at the Tar Heel Drive-In Theatre during many of it’s re-releases on July 21,1978. It was the only time that this movie played as a re-release in the greater High Point and Archdale areas.

thanks raysson,noticed a lot drive-ins in N.C. seem to go the triple X route towards the end.Sad.

Above address is WAY, WAY off!

Approx. address for this drive-in was 10102 South Main Street, near Tar Heel Dr.

The screen of this drive-in was hidden from view by cedar trees, but drivers coming down the hill on Hwy 311 had a clear view and probably caused an accident or two during the X-rated movie showings. Later, after the drive-in was demolished, the site served as a place for evangelistic tent revivals. A shopping center is presently there. And to set the record straight, it was at the corner of what is now Commanche Drive and Main Street.