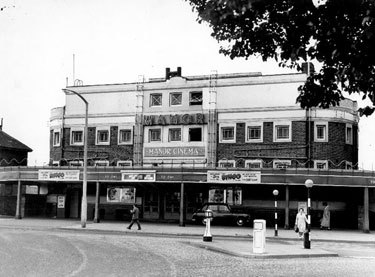 The Manor Cinema is located on City Road, close to the junction of Prince Of Wales Road and Ridgeway in the Intake district. It was opened on 12th December 1927 and was built to serve the expansion of housing estates in the Sheffield Manor district.

The cinema was owned by Manor Picture House Ltd. and built by M.J. Gleeson, the local builder. The façade of the cinema was faced with rustic brick and coloured cement rendered dressings with the ‘MANOR CINEMA’ name in the brick work above the entrance doors. Entrance to the cinema was through an 18 foot wide vestibule into a spacious foyer housing the pay box. The hall was built on a steeply sloping site and the circle, often referred to as the first balcony, was on the same level as the entrance. Stairways led down to the stalls and up a second balcony. Seating was for 1,680, making the Manor Cinema another of the large suburban city cinemas of Sheffield. The auditorium was decorated with fibrous plaster pilasters, coffered ceiling and beams with a proscenium opening of 23 feet. The screen was hung in front of a curtain that covered the whole of the back of the stage. The projection room was at the back of the second balcony. The building also had a billiard hall attached.

Sound was installed in 1930. In 1936 a canopy was erected on the outside of the building running the entire length of the façade. In 1950 a more modern style proscenium was fitted and in 1955 a new projection suite was fitted at the back of the stalls. In 1956 the proscenium was widened to enable a Cinemascope screen to be fitted. In October 1958 the Manor Cinema was sold to the Leeds based Star Cinema Circuit who closed the cinema to carry out further improvements including the installation of a new sound system. The reopening was celebrated in style with a grand fireworks display, when 120 rockets were set off, one for each of the cinemas on the Star Circuit.

Children’s Saturday Matinees were introduced at 10am & 2pm along with Sunday opening. The Manor Cinema first closed as a cinema, apart from the Children’s Saturday matinees, on 21st July 1963, reopening three days later as the Manor Casino - Star Bingo Club. However, films returned on a part time basis along with some bingo sessions on 17th November 1963. Final closure for the Manor Cinema was on 14th June 1969 with Ewa Aulin in “Candy” & Jon Pertwee in “Round the Bend”. The building still stands in 2008 as a Somerfield supermarket, and in 2009, it was set to become a Tesco. In 2017 it is a Poundland store.

Yes, The Manor Cinema is now a Summerfield Supermarket.

Yes, Somerfield is a supermarket. (sorry I spelt it wrong last time) City Road is not part of Intake – don’t think I put Intake on my original posting.

1960’s used to take empty pg tip tea packets for free entry to kids Saturday matinee. Its now Tesco, shortly to be closed but I think the original Manor Cinema sign is still under the Tesco sign '