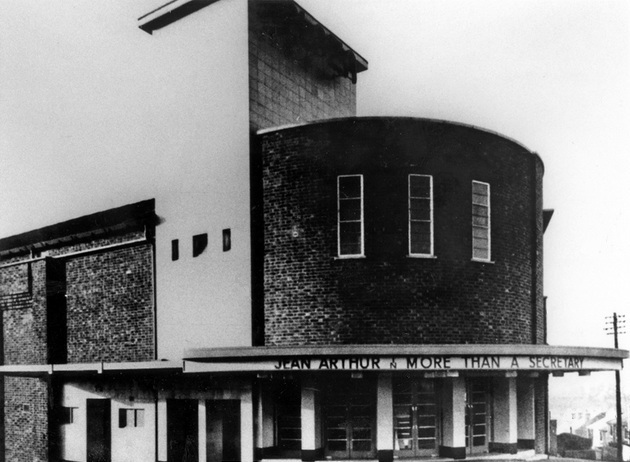 The Plaza Cinema was built at the junction of Richmond Road, Bramley Lane and Bramley Drive in the Handsworth district of Sheffield. The cinema opened on 27th December 1937 with Cecil B. de Mille’s western “The Plainsman” starring Gary Cooper and Jean Arthur. Designed by local architect Bernard Powell of Woodhouse and built by W. Malthouse Ltd., it was a typical 1930’s plain modern cinema. Built in rustic brick with a tower surfaced in faience. A large canopy ran around the corner entrance and a large entrance hall and foyer was provided with staircases on each side leading to the balcony and doors leading down into the stalls. Seating was for 1,100. The auditorium was of fibrous plasterwork with orange walls which paled to a light buff colour on the upper half. A dado of royal blue ran around the base of the walls. Illumination of the auditorium was provided by concealed trough lighting in the ceiling.

Controlled by Plaza (Sheffield) Ltd., the Plaza CINEMA only had two managers during its cinema days - George Turner 1937-1957 and Colin Adams 1957-1963. The Plaza Cinema was redecorated in July 1947. Sunday opening came in May 1953 and Saturday Children’s Matinees were introduced in April 1954. CinemaScope and stereo sound were installed in 1955 with Dorothy McGuire and Louis Jordan in “Three Coins In The Fountain” being the first ‘scope film screened in March 1955. The cinema closed for further redecoration in 1962.

In 1963 musical groups and variety acts were booked for one night stands. In 1963 the Plaza Cinema was taken over by Kerner Entertainments Ltd. who closed the cinema on 29th September 1963 reopening it as the Plaza Casino on Wednesday 2nd October 1963 with bingo. After being on bingo for several years it was converted into a Fastlane Superbowl bowling alley, which in 2008 was operated by Rileys. By April 2019 it was a church operated by the Sheffield Christian Life Centre.