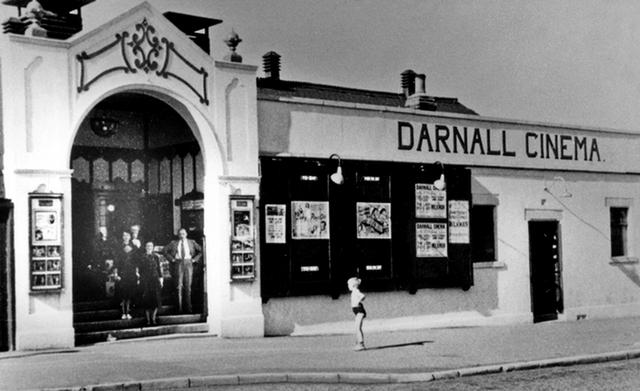 The Darnall Cinema opened on 5th September 1913. It was a small 500-seater located on Main Road, Darnell at the corner with Greenland Road. The much altered building is now (2014) occupied by Aries Lighting. Sound was installed in February 1930. Closure came on 2nd November 1957 when the feature was James Cagney in “Mr Roberts”. From opening to closure, the cinema was owned by William C. Brindley.

The Kinematograph Year Book for 1914 does not list the cinema; though it could be the mysterious “Cinema … . Darnell (sic)”.

KYB 1928 has proprietor and manager William C. Brindley of 41 Brook Road, Meersbrook Park who booked the films at the hall. There were two shows nightly and two programmes weekly.

Brindley had moved to Glynarth, South Anston according to KYB 1931, which also listed the cinema as having ‘disc’ sound. KYB 1935 gives the capacity as 700 and the sound system as “SOF (sound on film) and disc”. This repeats in KYB 1937, except that the seating dropped to 500.

KYB 1942 repeats the information about Brindley, his address, the seating capacity, the booking, the shows etc, but there is no mention of the sound system; and KYB 1945 drops mention of the capacity. It’s the same in KYB 1947.

Information about the capacity re-appears in KYB 1950 with a very specific 483 seats; and so it is in KYB 1954 when the sound system gets mentioned; it’s by Vitavox.

Use the Street View, above, to continue along Greenland Road (follow the blue car: in the 2014 version of SV) and turn to view the end wall of Aries Lighting. There’s a bricked-up exit door on your right and brick repair/infill on your left (formerly another exit?).

Look up and at the apex of the gable there’s a sign announcing “½ mile to Balfour Carpets” the other former cinema in the Darnall area of Sheffield.