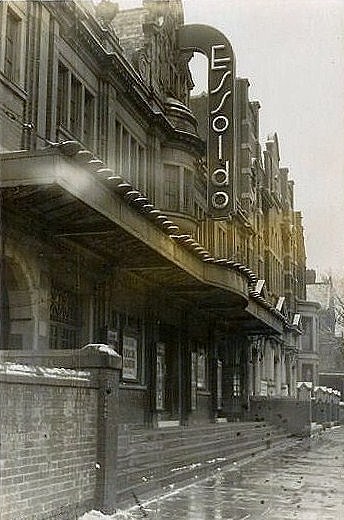 The Gaiety Theatre and Picturedrome was the second purpose-built cinema to open in the town, it opened on 22nd March 1913. It had an ornate facade and inside the auditorium, seating was provided in stalls and circle levels. There were two boxes on the side walls of the auditorium and the theatre was equipped with a decent sized stage and dressing rooms. On 7th November 1927, a Compton (Kinestra) 2Manual/8Rank theatre organ was installed and opened by organist Harold Howell.

The Gaiety Theatre and Picturedrome was closed in May 1933, and was re-opened on 1st January 1934. It was taken over by the Union Cinemas chain in August 1936, and they were taken over by the Associated British Cinemas(ABC) chain in October 1937. ABC closed it in November 1938. It was taken back by the Brennan circuit (previous owners). The Gaiety Cinema was damaged by German bombs on around 15th April 1941, and was patched up, reopening on 26th May 1941. James Brennon’s circuit continued to operate the Gaiety Cinema until the Newcastle based Essoldo chain took over in February 1948.

It was re-named Essoldo in 1950 and was closed on 1st June 1968 with Donald Wolfit in "Blood of the Vampire" & “Africa Addio”. The building was boarded up and was demolished in 1977, when offices were built on the site, known as Jubilee House, an adult training centre for the mentally disabled.